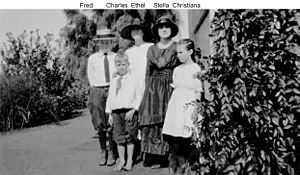 Fred (In hat) and siblings

Frederick Benjamin "Fred" Gipson (February 7, 1908 – August 14, 1973) was an American author. He is best known for writing the 1956 novel Old Yeller, which became a popular 1957 Walt Disney film. Gipson was born on a farm near Mason in the Texas Hill Country, the son of Beck Gipson and Emma Deishler. After working at a variety of farming and ranching jobs, he enrolled in 1933 at the University of Texas at Austin. There he wrote for the Daily Texan and The Ranger, but he left school before graduating to become a newspaper journalist.

In the 1940s, Gipson began writing short stories with a western theme, which proved to be prototypes for his longer works of fiction that followed. In 1946, his first full-length book, The Fabulous Empire: Colonel Zack Miller's Story, was published. 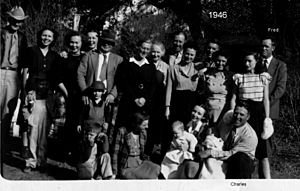 Hound-Dog Man, published in 1947, established Gipson's reputation when it became a Doubleday Book-of-the-Month Club selection and sold over 250,000 copies in its first year of publication. It was made into a film in 1959. His additional works included The Home Place (later filmed as Return of the Texan, a 1952 Western starring Dale Robertson and Joanne Dru), Big Bend: A Homesteader's Story, Cowhand: The Story of a Working Cowboy, The Trail-Driving Rooster, and Recollection Creek. 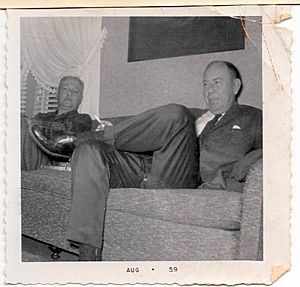 His novel Old Yeller won the Newbery honor, and was adapted into a 1957 Walt Disney Studios film. Old Yeller has two sequels – Savage Sam (1962), which also became a Walt Disney film in 1963, and Little Arliss, published posthumously in 1978. Old Yeller was the novel that Gipson considered his best work. Set in the Texas Hill Country in the 1860s just after the American Civil War, the story is about the 14-year-old boy Travis Coates (played by Tommy Kirk in the film) left in charge of the household while his father is away. Old Yeller, a stray dog adopted by the boy, helps in the formidable task of protecting the family on the Texas Ranch. Old Yeller was based on a Deishler family dog named "Rattler" and unlike Old Yeller, Rattler was a dark colored Border Collie.

All content from Kiddle encyclopedia articles (including the article images and facts) can be freely used under Attribution-ShareAlike license, unless stated otherwise. Cite this article:
Fred Gipson Facts for Kids. Kiddle Encyclopedia.