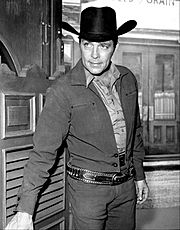 Robertson was born on July 24, 1923 in Hurrah, Oklahoma. He was raised in Claremore, Oklahoma. Robertson studied at Oklahoma Military Academy. He was married to Susan Robertson until his death in 2013. Robertson died on February 27, 2013 from pneumonia caused by lung cancer in his home in San Diego, California, aged 89.

All content from Kiddle encyclopedia articles (including the article images and facts) can be freely used under Attribution-ShareAlike license, unless stated otherwise. Cite this article:
Dale Robertson Facts for Kids. Kiddle Encyclopedia.