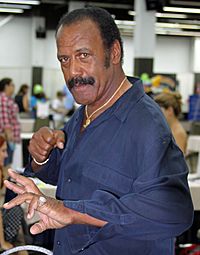 Frederick Robert Williamson (born March 5, 1938), also known as The Hammer, is an American actor, movie director and former professional American football defensive back. He was born in Gary, Indiana.

Williamson is best known for his roles as Tommy Gibbs in the 1973 crime drama movie Black Caesar and its sequel Hell Up in Harlem. Williamson also had other notable roles in other 1970s movies such as; Hammer (1972), That Man Bolt (1973) and Three the Hard Way (1974).

All content from Kiddle encyclopedia articles (including the article images and facts) can be freely used under Attribution-ShareAlike license, unless stated otherwise. Cite this article:
Fred Williamson Facts for Kids. Kiddle Encyclopedia.