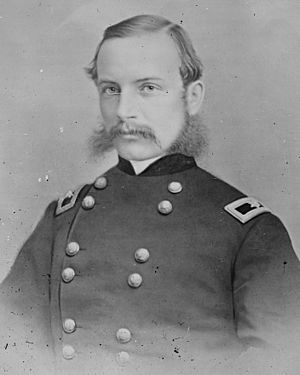 Frederick Winthrop (August 3, 1839 – April 1, 1865) was an American Union Colonel during the period of the American Civil War. General Winthrop, an officer in the Union Army, was killed at the Battle of Five Forks about one week before General Robert E. Lee surrendered his army following the Battle of Appomattox Court House. Winthrop joined the Army of the Potomac on April 11, 1862, participating in most of its famous battles. Winthrop had been a brevet brigadier general at the time of his death. Winthrop received his appointment as brevet major general dated to April 1, 1865.

He is buried in Green-Wood Cemetery in Brooklyn, New York.

All content from Kiddle encyclopedia articles (including the article images and facts) can be freely used under Attribution-ShareAlike license, unless stated otherwise. Cite this article:
Frederick Winthrop Facts for Kids. Kiddle Encyclopedia.