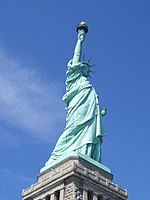 The Statue of Liberty is a very popular icon of liberty.

Liberty means the condition in which an individual has the ability to act following his or her own will and alternatively, achieve their potential, within the context of other words like political freedom. It is term that has contested meanings.

Classical liberalism conceptions of liberty conceive mainly of the freedom of the individual from outside compulsion in terms of freedom from restraint and social liberalist perspective, on the other hand, highlights the need for social and economic equality, as in the power and resources to fulfill one's potential. As such, a social liberalist connects liberty (i.e. freedom) to the equal distribution of political power (i.e. democracy) in the sense of positive liberty. They argue that liberty without equality means the domination of the most powerful. Thus, freedom and democracy are seen as connected and ultimately, antagonistic.

John Stuart Mill, in his work, On Liberty, was the first to recognize the difference between liberty as the freedom to act and liberty as the absence of coercion (being forced to do something). Mill also sought to define the "nature and limits of the power which can be legitimately exercised by society over the individual” and as such, he describes an inherent and continuous antagonism between liberty and authority and thus, the prevailing question becomes "how to make the fitting adjustment between individual independence and social control".

Some of the main types of human freedom are: freedom to life, freedom of association, freedom of belief, freedom of speech, freedom to express oneself, freedom of the press, freedom to choose one's state in life. However, the civil constitutions of each country have different definitions of the freedoms allowed to the citizens. It has been argued that any law limits freedom, since it sets limits on what people may do.

All content from Kiddle encyclopedia articles (including the article images and facts) can be freely used under Attribution-ShareAlike license, unless stated otherwise. Cite this article:
Liberty Facts for Kids. Kiddle Encyclopedia.