French Constitution of 1791 facts for kids 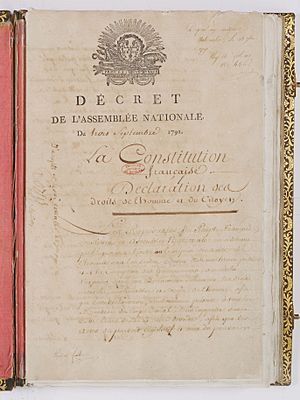 The French Constitution of 1791 was the second written Constitution of France. The new French Government started using it after the French Revolution. It had the Declaration of the Rights of Man and of the Citizen for its introduction.

This Constitution said that France was going to have a constitutional monarchy. The biggest disagreement was over how much power the King of France should have in such a system. After very long negotiations, the first Constitution was brought in September of 1791.

It created a constitutional monarchy. But the king ran away anyways, because he was scared of the Jacobins, who didn't like kings.

The idea of Separation of powers was the basis for the Constitution: The National Convention was the legislative body, the King and the Ministers made up the executive branch, and the judicial branch was independent from the other two. However, the French Revolution still continued after this document was signed.

The constitution tried to create a liberal bourgeois constitutional monarchy, but this did not work out. On 10 August 1792 the monarchy of France ended.

All content from Kiddle encyclopedia articles (including the article images and facts) can be freely used under Attribution-ShareAlike license, unless stated otherwise. Cite this article:
French Constitution of 1791 Facts for Kids. Kiddle Encyclopedia.