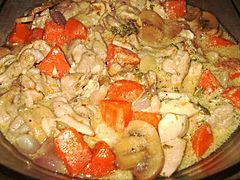 Fricassee or fricassée is a stew made with pieces of meat that have been browned in butter that are served in a sauce flavored with the cooking stock. Fricassee is usually made with chicken, veal or rabbit, with variations limited only by what ingredients the cook has at hand.

Fricassee is first attested in England in the mid-16th century. It is a French word, but the exact etymology is uncertain. It is theorized to be a compound of the French frire (to fry) and casser or quasser (to break in pieces). 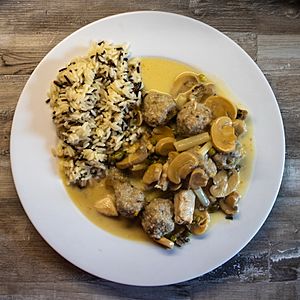 A meatball and mushroom fricassee served with rice

By the general description of frying and then braising in liquid, there are recipes for fricassee as far back as the earliest version of the medieval French cookbook Le Viandier, circa 1300. In 1490, it is first referred to specifically as "friquassee" in the print edition of Le Viandier.

The 16th-century cookery book The Good Huswifes Jewell contains "For fricasies of a lambes head and purtenance." The perfect English cooke contains instructions to prepare a "Fregacy of Lamb or Veal". Jean-Baptiste Tavernier describes "a lusty Fricassie" in his late 17th-century Travels through Turkey to Persia.

English fricassees were usually thickened with egg yolks, while Italian fricassea used a mixture of lemon and egg yolks. By the 18th century the egg yolks had started to be replaced by flour in English and American cuisines. In Martha Washington's recipe for chicken fricassee, the chicken was stewed in gravy, then a sauce was made with cream and egg yolks.

The early 19th-century cookery book A New System of Domestic Cookery by Maria Rundell says white sauce can be used for fricassee of "Fowls, Rabbits, White Meat Fish, of Vegetables". Broth made with chicken necks or feet, or used to boil meats, or similar is simmered with herbs and lemon peel, then thickened with cream (or egg yolk), flour and butter to make into a sauce.

Julia Child in Mastering the Art of French Cooking describes it as "halfway between a sauté and a stew" in that a sauté has no liquid added, while a stew includes liquid from the beginning. In a fricassee, cut-up meat is first sauteed (but not browned), then liquid is added and it is simmered to finish cooking. Cookbook author James Peterson notes that some modernized versions of the recipe call for the meat to be thoroughly browned before braising, but the classical version requires that both meat and vegetables remain with no caramelization.

In the early 19th-century cookery book A New System of Domestic Cookery by Maria Rundell, a fricassee of cold roast beef is made with very thinly sliced beef cooked in butter and broth with parsley and an onion, the sauce thickened with egg yolks, wine and vinegar. Fricasse of cold roast beef was among the recipes published in the popular women's magazine Godey's Lady Book during the American Civil War.

Chicken and other poultry

Chicken fricassee has been described as "a standard old-fashioned American dish". It was one of Abraham Lincoln's favorite dishes. It's the typical "comfort food" of Cajun cuisine.

A 1734 American recipe by Mrs. John Burroughs calls for birds seasoned with nutmeg, parsley, onion and mace, dredged in flour and browned in butter, then stewed in the pan with gravy, egg yolks, wine and nutmeg to make a sauce with the consistency of thickened cream. A 19th century recipe from California for Fricasa de pollos a la española (Spanish-style chicken fricasse) was prepared by frying chickens in lard with chopped onion, shallots, garlic and mushrooms. Tomato juice is added with olives, fresh herbs, and olive oil to make a thick stew.

In the Spanish Caribbean, one of the more popular dishes is fricasé de pollo (chicken fricassee). It was brought to the islands by settlers from the south of France and Spain. Unlike French style fricassee, it has a tomato-based sauce usually with red wine.

A traditional 17th-century Jewish fricassee is made with chicken feet and other parts that were historically more economical like wings and necks, and sometimes meatballs.

Hannah Glasse's rabbit fricasee is made with small pieces of breaded rabbit fried in butter and served with red wine gravy.

All content from Kiddle encyclopedia articles (including the article images and facts) can be freely used under Attribution-ShareAlike license, unless stated otherwise. Cite this article:
Fricassee Facts for Kids. Kiddle Encyclopedia.