A New System of Domestic Cookery facts for kids 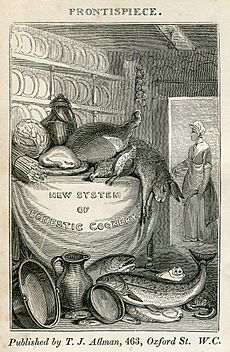 Mrs Rundell has been called "the original domestic goddess" and her book "a publishing sensation" and "the most famous cookery book of its time". It ran to over 67 editions; the 1865 edition had grown to 644 pages, and earned two thousand guineas.

The first edition of 1806 was a short collection of Mrs Rundell's recipes published by John Murray. It went through dozens of editions, both legitimate and pirated, in both Britain and the United States, where the first edition was published in 1807. The frontispiece typically credited the authorship to "A Lady". Later editions continued for some forty years after Mrs Rundell's death. The author Emma Roberts (c. 1794–1840) edited the 64th edition, adding some recipes of her own.

Sales of A New System of Domestic Cookery helped to found the John Murray publishing empire. Sales in Britain were over 245,000; worldwide, over 500,000; the book stayed in print until the 1880s. When Rundell and Murray fell out, she approached a rival publisher, Longman's, leading to a legal battle.

The 1865 edition is divided into 35 chapters over 644 pages. It begins with a two-page preface. The table of contents lists each recipe under its chapter heading. There is a set of tables of weights, measures, wages and taxes before the main text. There is a full index at the end.

In contrast to the relative disorder of English eighteenth century cookery books such as Eliza Smith's The Compleat Housewife (1727) or Elizabeth Raffald's The Experienced English Housekeeper (1769), Mrs Rundell's text is strictly ordered and neatly subdivided. Where those books consist almost wholly of recipes, Mrs Rundell begins by explaining techniques of economy ("A minute account of the annual income and the times of payment should be kept in writing"), how to carve, how to stew, how to season, to "Look clean, be careful and nice in work, so that those who have to eat might look on", how to choose and use steam-kettles and the bain-marie, the meanings of foreign terms like pot-au-feu ("truly the foundation of all good cookery"), all the joints of meat, the "basis of all well-made soups", so it is page 65 before actual recipes begin.

The recipes are written as direct instructions. Quantities, if given, are incorporated in the text. For example, "Gravy to make Mutton eat like Venison" runs:

Pick a very stale woodcock, or snipe, cut it to pieces (but first take out the bag from the entrails), and simmer with as much unseasoned meat gravy as you will want. Strain it, and serve in the dish.

Basic skills like making pastry are explained separately, and then not mentioned in recipes. Under "Pastry", Mrs Rundell gives directions for "Rich Puff Paste", "A less rich Paste", and "Crust for Venison Pasty", with variations such as "Raised Crusts for Custards or Fruit". A recipe for "Shrimp Pie, excellent" then proceeds with the bare minimum indication of quantities and a passing mention of "the paste":

Pick a quart of shrimps; if they are very salt, season them with only mace and a clove or two. Mince two or three anchovies; mix these with the spice, and then season the shrimps. Put some butter at the bottom of the dish, and over the shrimps, with a glass of sharp white wine. The paste must be light and thin. They do not take long baking.

Advice is given on choosing the best supplies in the market. For instance:

Fowls.—If a cock is young, his spurs will be short; but take care to see they have not been cut or pared, which is a trick often practised. If fresh, the vent will be close and dark.

There have been over 67 editions, success leading to constant revision and extension: the first edition had 344 pages, while the 1865 edition runs to 644 pages including the index. Some landmarks in the book's publication history are:

All content from Kiddle encyclopedia articles (including the article images and facts) can be freely used under Attribution-ShareAlike license, unless stated otherwise. Cite this article:
A New System of Domestic Cookery Facts for Kids. Kiddle Encyclopedia.