Fried clams are clam dipped in milk and then flour and deep-fried.

Fried clams are an iconic food, "to New England, what barbecue is to the South". They tend to be served at seaside clam shacks (roadside restaurants). Clam rolls are fried clams served in a hot dog bun. It is usually serve with Tartar sauce.

The clams are dipped in evaporated milk, and coated with a combination of regular, corn, and/or pastry flour. Then the coated clams are fried in canola oil or soybean oil, or lard.

The usual variant in New England is made from whole soft-shell clams, known as "whole-bellies"; these include the clam's gastrointestinal tract and have a fuller flavor. Some restaurants remove the clam's chewy siphon called the neck.

Outside New England, "clam strips", made of sliced parts of Atlantic surf clams, are more common. 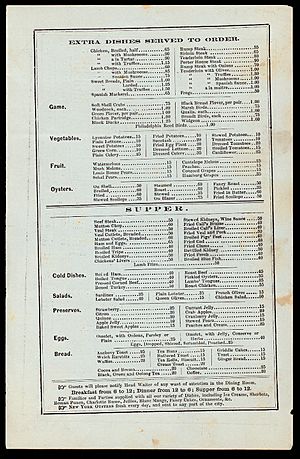 1865 menu with fried clams and oysters

Fried clams are mentioned as early as 1840, and are listed on an 1865 menu from the Parker House hotel. How exactly they were prepared is unclear; the 1865 menu offers both "oysters—fried" and "oysters—fried in batter", but only "fried clams".

The modern deep-fried, breaded version is generally credited to Lawrence Henry "Chubby" Woodman from Essex, Massachusetts. He is said to have created the first batch on July 3, 1916, in his small roadside restaurant, now Woodman's of Essex. One of his specialties was potato chips, so he had large vats for deep-frying. He used clams he had collected himself from the mud flats of the Essex River, located close to his home.

Later, Thomas Soffron, of Soffron Brothers Clam Co., based in Ipswich, Massachusetts, created clam strips, which are made from the "foot" of hard-shelled sea clams. He sold these to Howard Johnson's in an exclusive deal, and as the chain expanded, they became popular throughout the country.

Clams in themselves are low in cholesterol and fat, but fried clams absorb cooking fat.

All content from Kiddle encyclopedia articles (including the article images and facts) can be freely used under Attribution-ShareAlike license, unless stated otherwise. Cite this article:
Fried clams Facts for Kids. Kiddle Encyclopedia.