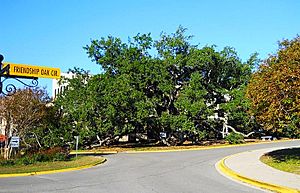 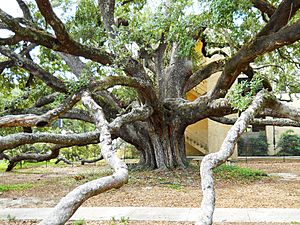 Friendship Oak has massive, downward sweeping limbs that are typical of Quercus virginiana

Friendship Oak is a 500-year-old southern live oak (Quercus virginiana) located on the Gulf Park campus of the University of Southern Mississippi in Long Beach, Mississippi. The campus was formerly Gulf Park College for Women from 1921 until 1971.

Friendship Oak dates from the year 1487, and was a sapling at the time that Christopher Columbus first visited the New World. According to legend, those who enter the shade of its branches will remain friends for all their lives.

In the 1920s, poet Vachel Lindsay taught at Gulf Park College for Women and read poetry to students beneath the branches of Friendship Oak.

Friendship Oak was the 110th tree to be registered with the Live Oak Society. At the time of registration (circa 1940), the tree's trunk circumference was 14 feet (4.3 m).

In 1950, the oak was featured in a Life magazine article about Gulf Park College, where students attended classes under the tree.

On August 22, 2011, staff from the Mississippi Forestry Commission took the following measurements on Friendship Oak: 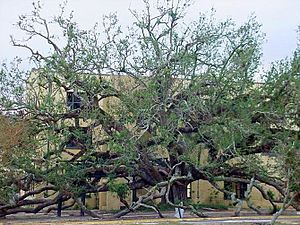 Numerous weddings have taken place beneath the branches of the Friendship Oak. Most of the wedding ceremonies have been celebrated by former students of Gulf Park College or the University of Southern Mississippi.

Through the centuries, hurricane winds have defoliated the Friendship Oak and subjected its roots to seawater pushed inland from the Gulf of Mexico as storm surges. At least twice since the mid-1950s, acorns from Friendship Oak have been gathered to produce seedlings for replanting along the Mississippi Gulf Coast to replace live oaks that were destroyed by Hurricanes Camille (1969) and Katrina (2005).

All content from Kiddle encyclopedia articles (including the article images and facts) can be freely used under Attribution-ShareAlike license, unless stated otherwise. Cite this article:
Friendship Oak Facts for Kids. Kiddle Encyclopedia.