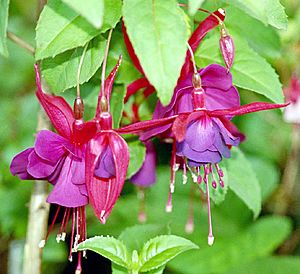 Fuchsia is a genus of flowering plants. They are often purplish-red, which is where we get the colour fuchsia.

Fuchsia belongs to the Onagraceae family of flowering plants. Fuchsia has 110 species. It consists mostly of shrubs or small trees.

The first, Fuchsia triphylla, was discovered on the Caribbean island of Hispaniola (Haiti and the Dominican Republic) about 1696–1697. The discoverer was the French monk and botanist, Charles Plumier, during his third expedition to the Greater Antilles. He named the new genus after the German botanist Leonhart Fuchs (1501–1566).

All content from Kiddle encyclopedia articles (including the article images and facts) can be freely used under Attribution-ShareAlike license, unless stated otherwise. Cite this article:
Fuchsia Facts for Kids. Kiddle Encyclopedia.