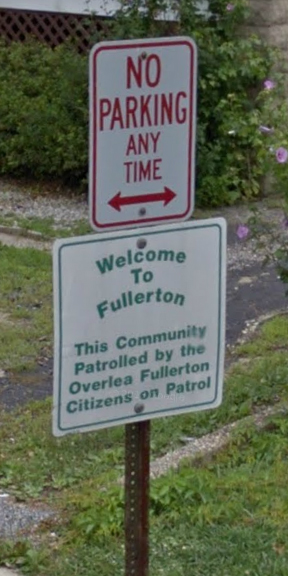 The “Welcome to Fullerton” sign, located at 41 Henry Avenue

Fullerton is an unincorporated community (part of Northern Overlea, Maryland) in Baltimore County, Maryland, United States.  The area is often considered part of Nottingham, Maryland, despite being part of Overlea, Maryland.  Fullerton residents have either 21236 or 21206 as their ZIP code.

In 1976, Fullerton Elementary School was established.  The school colours are green and yellow, and the mascot is a mouse.  The school currently serves 553 pre-K-to-fifth-grade students and employs thirty-three teachers.  The attendance rate in 2011 and 2012 was equal to or greater than 95 percent.  Every Independence Day, a fireworks show is put on at Fullerton Park, a field adjacent to the school.2013 Schedule of Fireworks Displays,

The movie theatre Beltway Movies 6 (located in the Belair Beltway Plaza shopping centre) was featured in the 2000 John Waters film Cecil B. Demented.

There was a major fire at an empty building owned by the Schmidt Baking Company on Fitch Lane in Fullerton in April, 2008.

In 2013, police received numerous complaints about rowdy teens being loud and destructive around a roller rink known as Skate Land, located behind the local Denny's.  The troubles prompted the county to withhold renewal of the venue's amusement hall license; the county had also threatened to revoke the hall's skating license.  After negotiations with the county, Skate Land is now only permitted to hold parties and events Monday through Thursday, and only until 9 P.M.

All content from Kiddle encyclopedia articles (including the article images and facts) can be freely used under Attribution-ShareAlike license, unless stated otherwise. Cite this article:
Fullerton, Maryland Facts for Kids. Kiddle Encyclopedia.