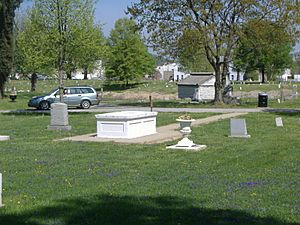 South side of monument

This was the second memorial built by the Grand Army of the Republic in the commonwealth of Kentucky, with the first being built in Kentucky's capital city of Frankfort, Kentucky, the Colored Soldiers Monument in Frankfort. Most GAR monuments are built in courthouse squares, but both in Kentucky are in cemeteries. By the time interest in building such memorials to the Civil War had waned; most G.A.R. had been built long before Covington's. It is the only monument related to the war in Kentucky shaped like a sarcophagus. It measures three feet high, three feet tall, and is ten feet long. It is made of concrete, and was painted white.

Most monuments to the War in Kentucky were made to honor Confederate soldiers/veterans/memories. Though many regions in the state were pro-Union during the war, by Reconstruction Kenton County, Kentucky was one of the few places in Kentucky where sentiment was still decidedly pro-Union, which is why the Grand Army of the Republic chose Covington in particular for this monument.

On July 17, 1997, it was one of sixty different monuments to the Civil War in Kentucky placed on the National Register of Historic Places, as part of the Civil War Monuments of Kentucky Multiple Property Submission. It is a few feet from the Veteran's Monument in Covington, which was also on the same MPS, but was built four years after the G.A.R. Monument was.

All content from Kiddle encyclopedia articles (including the article images and facts) can be freely used under Attribution-ShareAlike license, unless stated otherwise. Cite this article:
GAR Monument in Covington Facts for Kids. Kiddle Encyclopedia.