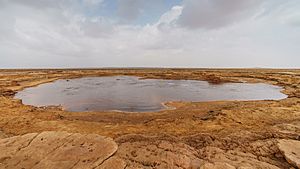 Gaet'ale pond is a small hypersaline lake found near the Dallol crater in the Danakil Depression (Afar, Ethiopia). It is found over a hot spring. It has no inlet or outlet streams. The water of Gaet'ale Pond has a salinity of 43%, making it the saltiest body of water on Earth.

Gaet'ale pond is the largest of a series of small ponds found approximately 4 kilometres (2.5 mi) southeast of Dallol springs. It is shaped like a crescent. It has a diameter of about 60 metres (200 ft).

Bubbles of odourless gas are released from the lake. It is likely volcanically produced CO2. It has been proposed that the gas may be harmful for small animals or humans because dead birds and insect have been found around the pond.

All content from Kiddle encyclopedia articles (including the article images and facts) can be freely used under Attribution-ShareAlike license, unless stated otherwise. Cite this article:
Gaet'ale pond Facts for Kids. Kiddle Encyclopedia.