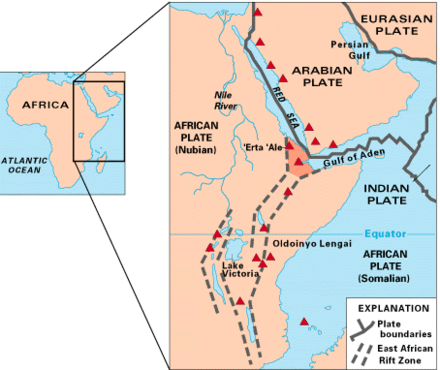 Location map of the Afar Triangle (the shaded area in the center of the map) and the East African Rift zones; red triangles show historically active volcanoes 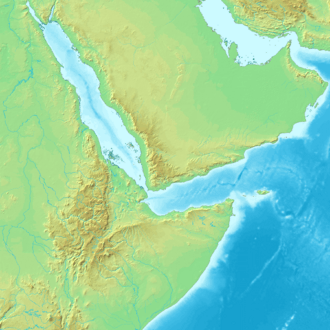 Topographic map showing the Afar Triangle, which correlates to the shaded area in the location map shown above 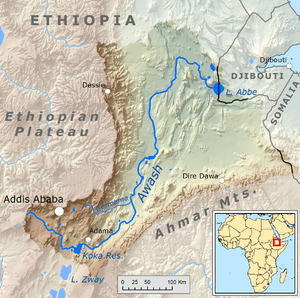 The Afar Triangle (or Afar Depression) is a low area bordering on the Red Sea. It is part of the Great Rift Valley in East Africa. The area overlaps the borders of Eritrea, Djibouti and the entire Afar region of Ethiopia.

Important fossil specimens of the earliest hominins have been found in this area. These are the earliest of the human clade. The area is thought by some paleontologists to be the cradle of the evolution of humans.

Many important fossil localities exist in the Afar region. These sites have produced specimens of the earliest (fossil) hominins and of human tool culture, as well as many fossils of flora and fauna.

The Triangle includes the lowest point in Africa, Lake Asal, Djibouti, at 155 m (or 509 ft) below sea level.

The Awash River is the main waterflow into the region. It runs dry during the annual dry season, and ends as a chain of saline lakes. The northern part of the Afar Depression is also known as the Danakil Depression. The lowlands are affected by heat, drought, and poor air circulation. Some of the lowlands are the hottest places (year-round average temperatures) of anywhere on Earth.

The Afar Triangle is bordered by high areas, as shown on the topographic map.

The Depression is a plate tectonic triple junction. This geologic feature is one of earth's great active volcanic areas, so the floor of the depression is composed of lava, mostly basalt.

The continuous process of volcanism makes mineral deposits, like sulfur, salt, bentonite, and gypsum. There are also geothermal energy sources and hot springs in different areas of the region.

In 2005, a giant rift was formed in just a few days. The rift opened when the Dabbahu Volcano erupted. The rift is part of the process of the Arabian and African plates moving apart. This new crack, 500 metres (1,640 ft) long, and 60 metres (197 ft) deep, opened when the lava from the erupting volcano flowed underground and cooled. It left a 60 kilometres (37 mi) long, 8 metres (26 ft) wide dike within days.

All content from Kiddle encyclopedia articles (including the article images and facts) can be freely used under Attribution-ShareAlike license, unless stated otherwise. Cite this article:
Afar Triangle Facts for Kids. Kiddle Encyclopedia.