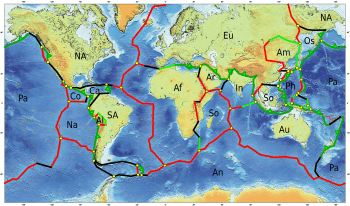 Of the many possible types of triple junction only a few are stable through time ('stable' in this context means that the geometrical configuration of the triple junction will not change through geologic time). The meeting of 4 or more plates is also theoretically possible but junctions will only exist instantaneously.

The Nootka Fault at the triple junction of the North American Plate, the Explorer Plate, and the Juan de Fuca

All content from Kiddle encyclopedia articles (including the article images and facts) can be freely used under Attribution-ShareAlike license, unless stated otherwise. Cite this article:
Triple junction Facts for Kids. Kiddle Encyclopedia.