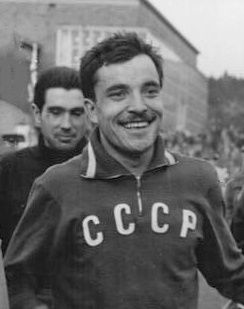 Gainan Rakhmatovich Saidkhuzhin (Russian: Гайнан Рахматович Сайдхужин; 30 June 1937 – 13 May 2015) was a Russian cyclist. He was a ten-time cycling champion of the Soviet Union. He competed in the road race at the 1960 and 1964 Summer Olympics and finished in 34th and 41st places, respectively. He was born in Novosibirsk to a Tatar family.

All content from Kiddle encyclopedia articles (including the article images and facts) can be freely used under Attribution-ShareAlike license, unless stated otherwise. Cite this article:
Gainan Saidkhuzhin Facts for Kids. Kiddle Encyclopedia.