The first GWL was held in June 1992. It was a spinoff from the BBC Gardeners' World television series. The event had 17,500 attendees and over 100 exhibitors. Since 2005 GWL has been co-located with the BBC Good Food Show Summer. Until 2015, GWL included RHS Flower Show Birmingham, but after the 2015 Show GWL and RHS parted ways. BBC Gardeners' World Live continues to be one of the country's leading gardening events.

The show attracts an audience of between 90,000 and 100,000 annually. The Audit Bureau of Circulations confirmed the 2010 show's attendance at 101,005. With 564 participating companies between 16–20 June 2010. In celebration of her 60th birthday formal model and socialite Twiggy was the honorary recipient of a named rose. Tickets are sold via the NEC's box office, The Ticket Factory. In 2017 the event celebrated 50 years of BBC Two's Gardeners' World. 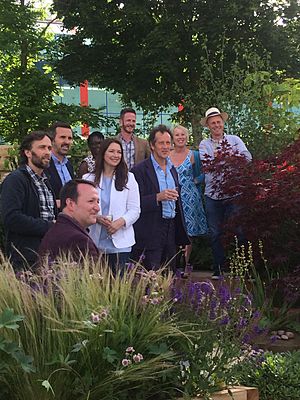 The presenters of BBC Two's Gardeners' World filmed from the event for their 1-hour anniversary special, which aired on Friday 17 June 2017.

The 2017 Show included features celebrating the 50th anniversary of BBC Two's Gardeners' World including The Nostalgia Garden set in the 60s (designed by Paul Stone), and The Anniversary Garden showing vignettes of how the garden design styles have developed over the decades (designed by Professor David Stevens). The BBC Two production team filmed at the event on Wednesday (before opening to the public) and Thursday, with the resulting 1-hour anniversary TV special airing on Friday 17 June. Best in Show was won by Wyevale Garden Centres for their 'Romance in the Ruins' garden designed by Claudia de Yong.

In 2016 the show includes Floral Marquee, Show Gardens and BBC Gardeners' World Live Theatre where the TV presenters shared their inspiration live on stage, along with Alan Titchmarsh on Friday.

Rose Dedications - every year a new breed of rose is specifically dedicated and named after a leading public figure. Previous recipients include Phillip Schofield, Barbara Windsor and Twiggy. In 2017 the new rose 'Gardeners' Gold' was launched.

In recent years, sponsors involved in the Show include 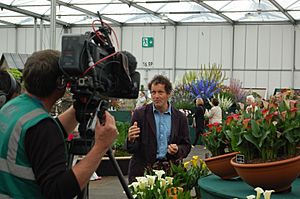 All content from Kiddle encyclopedia articles (including the article images and facts) can be freely used under Attribution-ShareAlike license, unless stated otherwise. Cite this article:
Gardeners' World Live Facts for Kids. Kiddle Encyclopedia.