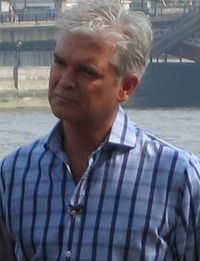 Schofield gained attention for working for the BBC. He was a presenter for Children's BBC on weekdays from 1985 to 1987. He was later a presenter on the children's Saturday morning magazine show Going Live! between September 1987 and April 1993.

Schofield was born in Oldham, Lancashire. He grew up in Newquay, Cornwall. At the age of 19, he moved with his family to New Zealand. He is a dual British and New Zealand citizen. He married Stephanie Lowe in 1993. The couple have two children. He lives in Henley-on-Thames, Oxfordshire. On 7 February 2020, Schofield came out as gay to the public.

All content from Kiddle encyclopedia articles (including the article images and facts) can be freely used under Attribution-ShareAlike license, unless stated otherwise. Cite this article:
Phillip Schofield Facts for Kids. Kiddle Encyclopedia.