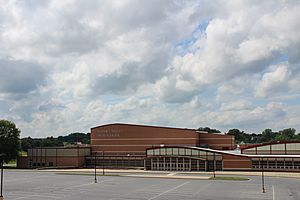 Garnet Valley is an unincorporated community in Delaware County, Pennsylvania, United States. The name was created by the United States Postal Service in late 2006 to allow residents of Bethel Township and Concord Township who were within the 19061 ZIP code and were part of the Garnet Valley School District to distinguish themselves from residents of Upper Chichester Township. The default "city name" for the 19061 ZIP code is Marcus Hook; other acceptable names in the ZIP code include Trainer, Linwood, and Boothwyn. The residents of Bethel Township and Concord Township sought a new postal identity because the ZIP code "city names" are often confused with actual municipal names.

All content from Kiddle encyclopedia articles (including the article images and facts) can be freely used under Attribution-ShareAlike license, unless stated otherwise. Cite this article:
Garnet Valley, Pennsylvania Facts for Kids. Kiddle Encyclopedia.