Glen Mills is an unincorporated community in Concord Township, Delaware County, Pennsylvania, United States about 27 miles west of Philadelphia. The ZIP code for Glen Mills is 19342.

The area around Glen Mills was part of the original land grant given to William Penn in 1681. George Cheyney was the first settler here, for which the nearby town of Cheyney is named. Later, this land was sold and divided. The name Glen Mills is taken from two paper mills built by the Willcox family, one in 1835 and the second in 1846. From 1864 to 1878, these mills supplied the United States government with a special, patented paper for the printing of government bonds and notes.

The Glen Mills are no longer standing, but the grist mill built by Nathaniel Newlin in 1704 still stands and is a popular destination for picnickers and history buffs alike. A blacksmith shop was built on the former property in 1975. The Newlin Mill Complex was listed on the National Register of Historic Places in 1983.

A "wild west" themed restaurant/roadside attraction known as "The Longhorn Ranch" operated in Glen Mills during the 1960s. In the 1980s, that same site was the location of Pulsations nightclub. The site is currently the location of a retirement community.

A Glen Mills resident, pilot Michael R. Horrocks, died in the September 11, 2001 attacks. He was the first officer on Flight 175, the second plane to hit the World Trade Center.

The Glen Mills zip code, 19342, is unusual in the numerous geographic boundaries it crosses. It is located almost entirely in Delaware County 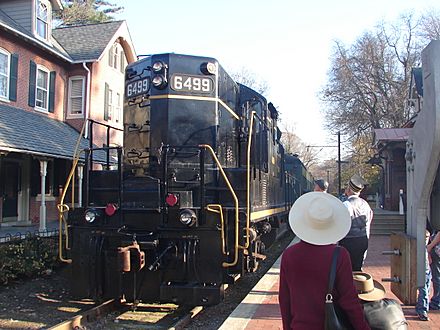 All content from Kiddle encyclopedia articles (including the article images and facts) can be freely used under Attribution-ShareAlike license, unless stated otherwise. Cite this article:
Glen Mills, Pennsylvania Facts for Kids. Kiddle Encyclopedia.