Chester Heights is a borough in Delaware County, Pennsylvania, United States. The population was 2,531 at the 2010 census. Most of the borough lies south of U.S. 1, about a mile southwest of Wawa.

The history of Chester Heights predates grants of William Penn, when the Swedes had penetrated some distance inland from the Delaware River and had found the rich soil very conducive to productive farming. To a remarkable extent, the area had continued to be so used until the last decade. In the 18th and 19th centuries, the borough was part of Aston Township, though this northernmost section of Aston did not have a village aspect as such. With the advent of a railroad, which made its first run-through on Christmas Day 1833, a concentration of houses developed. With the reach of the automobile, a settlement of homes sprang up along the oldest road in the borough. That route, now Valleybrook Road, was once known as the "Logtown Road" and was one of the earliest routes from Chester settlement to the interior. It wanders over and along the West Branch of Chester Creek and is noted for its abrupt curves at the borough's southern end.

An 1836 school building on Valleybrook Road and Llewellyn Road was, in its day, rented by its owners to Aston for $2 a month for use as the school for this area. It was subsequently known as the Logtown School and changed to the Chester Heights School in 1880. A second, much later stone school building stands in its place today. The borough was the Fourth Ward of Aston and had been referred to for some time as Chester Heights and Wawa. It was in the northern or "Wawa" area that, over the past one hundred years or more, several large land parcels were acquired for summer residences. To date, most of these tracts have remained relatively unchanged, though they are now used as year-round private residences. ("Wawa" was the Indian name for wild goose.)

In 1852 the cornerstone of St. Thomas the Apostle Catholic Church was laid, and it stands today with the addition of a parochial school and residences. In 1872 an association of Methodists purchased a farm in Aston, incorporating as the Chester Heights Camp-Meeting Associations, and it still convenes each July for religious retreats. The borough of Chester Heights was officially incorporated in 1945.

Today, approximately one dozen early fieldstone or brick dwellings remain intact, though not necessarily restored. The oldest homes date to 1720 or earlier; many of them were established by 1777 when "a number of the stragglers from the defeated American Army, hungry, demoralized and exhausted in their flight from the field at Brandywine, collected in the neighborhood of Logtown, where they passed the night, sleeping in the outbuildings and open fields." Altogether, the houses represent an historically valuable span of 18th century to Victorian architecture in the borough.

The Chester Heights Camp Meeting Historic District, Chamberlain-Pennell House, and Stonehaven are listed on the National Register of Historic Places.

Chester Heights was also the home of the fictional Grogan family from the 2008 movie "Marley and Me".

U.S. Route 1 (Baltimore Pike) runs through the northern part of the borough, leading northeast 20 miles (32 km) to Philadelphia and southwest 13 miles (21 km) to Kennett Square. Chester is 7 miles (11 km) to the southeast via Valleybrook Road and Concord Road.

The climate in this area is characterized by hot, humid summers and generally mild to cool winters. According to the Köppen Climate Classification system, Chester Heights has a humid subtropical climate, abbreviated "Cfa" on climate maps.

There were 1,056 households, out of which 29.3% had children under the age of 18 living with them, 49.7% were married couples living together, 9.8% had a female householder with no husband present, and 37.1% were non-families. 29.9% of all households were made up of individuals, and 6.3% had someone living alone who was 65 years of age or older. The average household size was 2.32 and the average family size was 2.93.

The Chester Heights Fire Company was formed in 1947. The station operates as Chester Heights Fire Company with the Delaware County fire radio as Station 71. The organization is located at the corner of Valleybrook Road and Llewellyn Road. The fire station currently operates an engine (Engine 71), a medium duty rescue (Rescue 71), a QRS (Quick Response Service) (QRS 71) and a utility pickup truck (Utility 71). The fire company is fully volunteer and serves the borough of Chester Heights in addition to a select portion of Thornbury Township. The organization also provides mutual aid in surrounding townships. In May 2015 the organization completed a new facility on the site of the prior building. The company today has approximately 20 members. 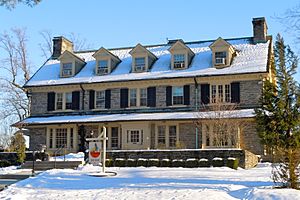 A building of the Wawa Food Markets headquarters

All content from Kiddle encyclopedia articles (including the article images and facts) can be freely used under Attribution-ShareAlike license, unless stated otherwise. Cite this article:
Chester Heights, Pennsylvania Facts for Kids. Kiddle Encyclopedia.