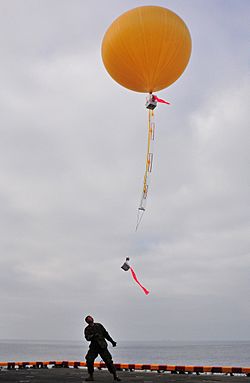 A gas balloon is a kind of balloon that uses a gas of low density to fly using buoyancy. Gas balloons sometimes fly very high, very far, and for a very long time.

The most common use for gas balloons are to measure the atmosphere. These are called weather balloons.

All content from Kiddle encyclopedia articles (including the article images and facts) can be freely used under Attribution-ShareAlike license, unless stated otherwise. Cite this article:
Gas balloon Facts for Kids. Kiddle Encyclopedia.