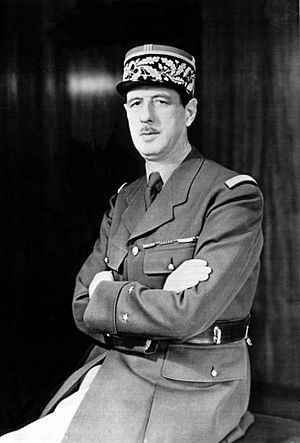 Gaullism cannot be seen within a political ideology, meaning it is not left or right. It is more of how the President of France should use their power.

"Neo-Gaullism" has been used to describe a movement after the death of de Gaulle in 1970 from people who are economic liberal than both traditional and social Gaullism.

The following is a list of Gaullist political parties and their successors:

All content from Kiddle encyclopedia articles (including the article images and facts) can be freely used under Attribution-ShareAlike license, unless stated otherwise. Cite this article:
Gaullism Facts for Kids. Kiddle Encyclopedia.