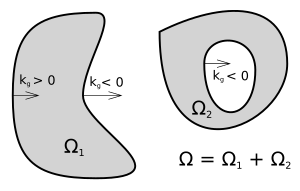 An example of complex region where Gauss-Bonnet theorem can apply. Shows the sign of geodesic curvature.

The Gauss-Bonnet theorem is a theorem that connects the geometry of a shape with its topology. It is named after the two mathematicians Carl Friedrich Gauß (1777-1855) and Pierre Ossian Bonnet (1812-1872) who both found it, independently of one another. The Curvature of the shape is used, as well as its Euler characteristic.

All content from Kiddle encyclopedia articles (including the article images and facts) can be freely used under Attribution-ShareAlike license, unless stated otherwise. Cite this article:
Gauss-Bonnet theorem Facts for Kids. Kiddle Encyclopedia.