Gawthorpe Hall is an Elizabethan country house on the banks of the River Calder, in the civil parish of Ightenhill in the Borough of Burnley, Lancashire, England. Its estate extends into Padiham, with the Stockbridge Drive entrance situated there. Since 1953 it has been designated a grade I listed building. The hall is financed and run by the National Trust in partnership with Lancashire County Council. In 2015 the Hall was given £500,000 funding from the council for vital restoration work needed on the south and west sides of the house.

Gawthorpe Hall's origins are in a pele tower, a strong fortification built by the Shuttleworths in the 14th century as a defence against invading Scots. The Shuttleworths occupied Shuttleworth Hall near Hapton from the 12th century. The diet of the family in Elizabethan times is known from their household books. The Shuttleworths bought glasses for rose water in 1589 and a "stillatory" for distillation in 1590. Most of their food was bought locally or came from their own farms, but spices were bought from London.

The new Elizabethan house at Gawthorpe was dovetailed around the pele tower from plans drawn up by Richard Shuttleworth but carried out after his death by his brother the Reverend Lawrence Shuttleworth. The foundation stone was laid on 26 August 1600. The architect is not recorded, but the house is generally attributed to Robert Smythson.

In 1604 Richard Stone, from Carr House in Bretherton, imported Irish panel boards and timber and stored 1,000 pieces in the tithe barn at Hoole until they were needed. The mottoes of the Kay-Shuttleworths are Prudentia et Justitia (Prudence and Justice – Shuttleworth) and Kynd Kynn Knawne Kepe (Kind Friends Know and Keep – Kay). Mottoes are found in the front porch and around the top of the tower. The initials KS, Kay-Shuttleworth occur in decoration throughout the house, on the front door and plaster roundels on the ceiling in the main dining room. 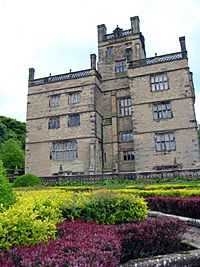 The rear of Gawthorpe Hall, with a portion of the rear gardens

An early occupant was Colonel Richard Shuttleworth, who inherited it in about 1607 from his uncle. Colonel Shuttleworth was High Sheriff of Lancashire for 1637, Member of Parliament for Preston (1640 to 1648 and 1654 to 1659) and commander of the Parliamentarian Army of the Blackburn Hundred during the Civil War. After his death Gawthorpe was leased to tenants, the Shuttleworths preferring to live at Forcett Hall near Richmond.

After Forcett was sold the Shuttleworths returned to Gawthorpe. In 1818 barrister, Robert Shuttleworth died and his daughter Janet inherited the estate at an early age. Her mother remarried and remained at Gawthorpe to protect her inheritance. In 1842 Janet married Sir James Kay of Rochdale, who adopted the surname Kay-Shuttleworth and commissioned Sir Charles Barry to carry out restoration and improvements to the house in the 1850s. Sir James was made a baronet in 1849 and served as High Sheriff of Lancashire for 1864. Charlotte Brontë, a family friend, visited the house. In 1953 Charles Kay-Shuttleworth, 4th Baron Shuttleworth, left Gawthorpe to live at Leck Hall near Kirkby Lonsdale and in 1970, after the death of Rachel Kay-Shuttleworth, Gawthorpe was gifted to the National Trust.

The National Trust described the hall as "an Elizabethan gem in the heart of industrial Lancashire". Nicholas Cooper described the hall's plan as an early example in which the main stair is immediately accessible from the main entrance, a feature that became standard. The hall has a collection of 17th and 18th century portraits on permanent loan from the National Portrait Gallery and is notable for its textiles, collected by the last resident family member Rachel Kay-Shuttleworth, about a fifth of which are on display.

The porch was rebuilt by Sir Charles Barry in 1851 who replaced the round-headed archway over the door with a four-centred arch on columns set on raised plinths and installed a three-light mullioned window above it to create a tile-floored vestibule. A stone plaque displaying the Shuttleworth, (three weaver's shuttles) Kay and Kay-Shuttleworths arms carved by Thomas Hurdeys in 1605 was retained. The Kay motto was inscribed on the outside of the door lintel and the Shuttleworth's on the inside. The door's decorative ironwork was designed by Pugin and made by Hardman's of Birmingham in 1851 at a cost of £17 1s 6d. The interior is decorated with a carved stone panel bearing Sir James Kay-Shuttleworth's arms and two ceremonial sheriff's javelins and a black oak sword-chest dated to about 1500.

The entrance hall was extended at its east end and reordered when the 17th-century mezzanine bedroom, a low-ceilinged pantry and the buttery were removed in the 1850s. The fireplace's stone over-mantel was used in the vestibule. The fireplace was given a marble surround, incorporating family initials in 1856 and an iron grate with lions-head dampers was supplied in 1852. A Renaissance-style panelled and arcaded openwork wooden screen was constructed in 1851 by William Horne. Oak panelling was installed framing two internal windows between which is a Jacobean panel and above it was a gallery for family portraits.

An Edwardian photograph shows the hall with a billiard table, upholstered bobbin-turned chairs, two wicker chairs and a Glastonbury armchair. The entrance hall was converted into a kitchen in 1945. The archway blocked, the screen dismantled, panelling removed and an internal window made into a serving hatch. Only the fireplace and geometrical ceiling were left intact. The room was later made into a study. In 1986 the screen was reconstructed, surviving woodwork re-installed and missing pieces re-carved and some stonework was repaired.

Portraits from the mid 17th century, include four on loan from the National Portrait Gallery, commemorating Roundheads imprisoned in Windsor Castle. There are portraits of Lord and Lady Derby, and of their contemporaries. Furniture includes a hutch cupboard inlaid with holly and bog oak from 1630 on a late 17th-century cupboard, two panel-back carved armchairs and a blanket chest. An ornate eight-day bracket clock from about 1725 is signed by Louis Mynuel.

The 17th-century Great Hall was used for formal dinners, performing plays, music and dancing and from 1816 became the family dining room. It was refurnished after restoration by Barry in 1852. Its galleried entrance screen was built by Thomas Hurdeys, Hugh Sandes and Cornelius Towndley in 1604-05. Above its doorways is the date 1605 and the initials of Hugh Shuttleworth and his sons Richard, Lawrence and Thomas. By 1850 the gallery was unsafe and shored up with pillars. An 18th-century over-mantel mirror, from the drawing room, was cut up to provide panels. Barry's 1851 carved stone chimney piece is superimposed on a wider 17th-century fireplace with an elliptical arch. Its sides are concealed with oak panelling and wall benches. The over-mantel has the Kay-Shuttleworth coat of arms, flanked by shields of Shuttleworth, Kay, and their wives – Fleetwood Barton, Jane Kirke, Catherine Clark and Mary Holden. The cast-iron fire grate and andirons were made in 1852 and the encaustic tiles in 1880.

Barry intended to retain its 1605 plaster ceiling but replaced it with a design reproducing the old pattern in an enriched form. In May 1852 red flock wallpaper designed to simulate 16th-century Italian velvets was supplied from J. G. Crace & Co. It survived until the 1960s and in 1987 new wallpaper was reprinted from the original "Rutland blocks", using distempered colours. Wool and silk brocade curtains by Crace have a pattern based on 15th-century Italian figured silk velvets devised by Pugin in 1844.

An 1850s Renaissance-style trestle table was supplied by Crace. Two alabaster models by G Andreoni of Pisa representing the Baptistry and church of Santa Maria della Spina were purchased by Blanche Kay-Shuttleworth in about 1880. An oak dining table with turned legs was made in 1881 by Gillows of Lancaster and the twist-turned oak dining chairs may also be by them. A carved oak Charles II armchair is one of a pair made in Yorkshire in 1808 with seat panels in petit point floral work. The trestle fire screen has an embroidered panel. The mid-19th-century Feraghan carpet is of the same date, style and manufacture as one shown in N. F. Green's 1884 watercolour.

The hall contains portraits of Sir Thomas Aylesbury painted in about 1642 by William Dobson, James Harrington and Nathaniel Highmore.

Robert Shuttleworth changed the medieval "dyning chamber" into a drawing room retaining its Jacobean panelling and plasterwork. The Italian Renaissance-style inlaid panelling with arabesques in semicircular arcading by the craftsmen who made the entrance screen, was started in 1603 and took a year to complete. The panelling's cornice supports a frieze and ceiling by Francis and Thomas Gunby. The frieze's contains a grotesque in which human, half-human and animal figures are entwined with fruiting stems and foliage. The ceiling is decorated with vines and oak branches in the spaces between strapwork ribbing. The plaster work took five months to complete in 1605. The fireplace arch was renewed by Barry in 1851 retaining the l7th-century hearthstone and stone fender and has a cast-iron gothic fire grate, designed by Pugin. Its andirons have armorial plates and wrought brass finials. The overmantel is dated 1604 above the Shuttleworth arms.

Of the Victorian furnishings and decoration, the bright green curtains were replaced by silk and linen brocatelle, re-woven from a fragment of material found in the house, with a pattern of stylised pomegranates and pineapples. A mid-19th-century blue and red Mahal carpet produced by Ziegler & Co. is a replacement and a Shirvan hearthrug dates from the 19th century. Portraits of Sir Ughtred and Lady Kay-Shuttleworth from 1884 are by John Collier.

The great barn, coach house and old farmhouse to the southwest of the hall

The small ornamental garden, created in the early 1850s, was laid out on a terrace overlooking the River Calder at the rear of the house by Charles Barry, the man most notable for his responsibility in the rebuilding of the House of Parliament. The semicircular terrace wall is Grade II listed. The course of the river was diverted away from Gawthorpe Hall in the 19th century because of pollution and again diverted to accommodate an open cast coal scheme north of the river in Padiham in the 1960s. Unfortunately World War II brought many hardships to the Kay-Shuttleworth family. Finding the garden becoming too difficult to keep up, the Kay-Shuttleworth family had it removed in 1946. Despite the gardens removal some many decades ago, the layout of the garden is still quite visible, especially during the summer months when the climate is dry.

Other listed buildings associated with the hall are the Great Barn (built 1602–04), the old farmhouse (1605–06, now used as the estate offices), the game larder, the coach house (1870), and the lodges and gateways on Habergham and Stockbridge drives (both c.1849).

Gawthorpe is one of the trailheads of the Brontë Way, a 43-mile (69 km) long-distance footpath that crosses the South Pennines to Haworth, continuing to Oakwell Hall, Birstall, West Yorkshire.

Burnley's new (2017) training facility on the north side of the river.

In 1955, the new Burnley F.C. chairman Bob Lord purchased 80 acres (32 ha) of Gawthorpe land, making Burnley one of the first clubs to set up a purpose-built training centre. By the 21st century, Burnley's three-decade absence from top flight football had left the facilities dated, with the old groundsman’s bungalow used for media meetings and the pitches prone to flooding. In the spring of 2017, the club opened a new £10.6-million training complex as the base for the senior squad and the club's academy.

All content from Kiddle encyclopedia articles (including the article images and facts) can be freely used under Attribution-ShareAlike license, unless stated otherwise. Cite this article:
Gawthorpe Hall Facts for Kids. Kiddle Encyclopedia.