GeForce is a brand name by Nvidia. It is a series of video cards.

The concurrent is the Radeon line by AMD.

GeForce is the successor of the RIVA TNT2 line.

In early 1999, Nvidia made a contest named "Name That Chip". The public should find a name for Nvidia's next video card. 7 winners should get a RIVA TNT2 Ultra as reward. The name "GeForce" won. 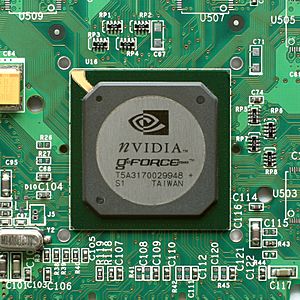 The latest video card series under the GeForce brand is the GeForce 30 series as of 2020.

All content from Kiddle encyclopedia articles (including the article images and facts) can be freely used under Attribution-ShareAlike license, unless stated otherwise. Cite this article:
GeForce Facts for Kids. Kiddle Encyclopedia.