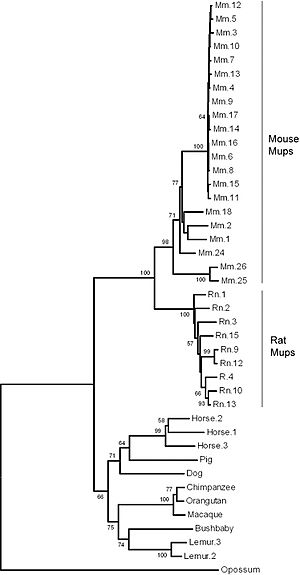 A gene family is a set of several similar genes. They occur by the duplication of a single original gene. Usually they have similar biochemical functions. The idea that genes get duplicated is almost as old as the science of genetics.

One such family are the genes for human haemoglobin subunits. The ten genes are in two clusters on different chromosomes, called the α-globin and β-globin loci. These two gene clusters are thought to have arisen from a precursor gene being duplicated, about 500 million years ago.

The biggest gene family is said to be the olfaction genes. The homeobox genes are another important group.

Genes for the immune system include several gene families. They code for the major histocompatibility complex, and the immunoglobulins. The toll-like receptors are the main sensors of infection in mammals.

All content from Kiddle encyclopedia articles (including the article images and facts) can be freely used under Attribution-ShareAlike license, unless stated otherwise. Cite this article:
Gene family Facts for Kids. Kiddle Encyclopedia.