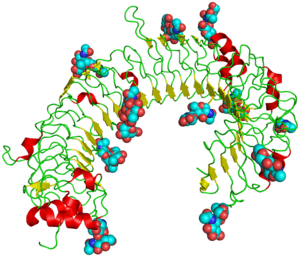 Toll-like receptors (TLRs) are proteins which act in the innate immune system and the digestive system. They are membrane-spanning, that is, they reach from the outside of the cell to the inside.

TLRs recognize molecules which come from microbes. Once microbes get through physical barriers such as the skin or intestinal tract mucosa, they are recognized by TLRs. The TLRs set up an immune cell response.

TLR signalling leads to the induction or suppression of genes that orchestrate the inflammatory response. In all, thousands of genes are activated by TLR signalling, and the TLRs are one of the most important means of gene modulation.

Toll-like receptors have also been shown to be an important link between innate and adaptive immunity through their presence in dendritic cells.

Most mammalian species have between ten and fifteen types of Toll-like receptors. Thirteen TLRs (TLR1 to TLR13) have been identified in humans and mice, and similar ones have been found in other mammalian species. TLRs are not identical in all mammals. For example, a gene coding for a protein like TLR10 in humans is present in mice, but seems to have been damaged at some time by a retrovirus. On the other hand, mice express TLRs 11, 12, and 13, none of which is present in humans. Other mammals may express TLRs that are not found in humans. Non-mammalian species may have TLRs different from mammals.

They got their name from their similarity to the protein coded by the Toll gene identified in Drosophila in 1985 by Christiane Nüsslein-Volhard. The gene in question, when mutated, makes the Drosophila flies look unusual. The researchers were so surprised that they spontaneously shouted out in German "Das ist ja toll!" which translates as "That's great!".

Toll-like receptors are now counted among the key molecules that alert the immune system to the presence of microbial infections. In 1996, Toll was found by Jules A. Hoffmann and his colleagues to have an essential role in the fly's immunity to fungal infection. It worked by activating the synthesis of antimicrobial peptides. Plant homologues were discovered in 1995 (rice XA21), and 2000 (Arabidopsis FLS2).

TLR 4 function as a lipopolysaccharide (LPS) sensing receptor was discovered by Bruce A. Beutler and colleagues. These workers proved that mice which could not respond to LPS had mutations which abolished the function of TLR4. This identified TLR4 as one of the key components of the receptor for LPS.

All content from Kiddle encyclopedia articles (including the article images and facts) can be freely used under Attribution-ShareAlike license, unless stated otherwise. Cite this article:
Toll-like receptor Facts for Kids. Kiddle Encyclopedia.