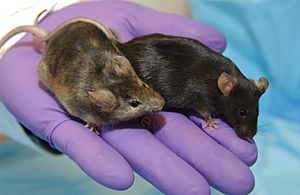 A laboratory mouse in which a gene affecting hair growth has been knocked out (left), is shown next to a normal lab mouse.

A gene knockout is a genetic technique in which one of an organism's genes is switched off or replaced by one which does not work.

The organisms, such as knockout mice, are used to learn about a gene that has been sequenced, but whose function is unknown or incompletely known. Researchers draw inferences from the difference between the knockout organism and normal individuals. Knockout is often abbreviated as KO.

Gene knock-in is the opposite term. There a gene is switched on, or a working gene inserted.

Knockout is accomplished through a combination of techniques. It starts in the test tube with a plasmid, or other DNA construct, and proceeding to cell culture.

Individual cells are genetically transformed with the DNA construct. Often the goal is to create an animal that has the altered gene.

If so, embryonic stem cells are genetically transformed and inserted into early embryos. Resulting animals with the genetic change in their germline cells can then often pass the gene knockout to future generations.

All content from Kiddle encyclopedia articles (including the article images and facts) can be freely used under Attribution-ShareAlike license, unless stated otherwise. Cite this article:
Gene knockout Facts for Kids. Kiddle Encyclopedia.