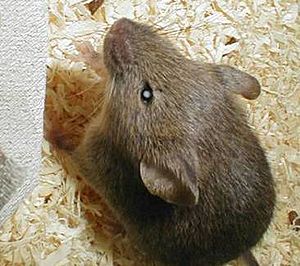 A knockout mouse is a genetically engineered mouse in which one or more genes have been turned off by a gene knockout.

Knockout mice are important animal models for studying the role of genes which have been sequenced but whose functions are not yet known. By causing a specific gene to be inactive in the mouse, and observing any differences from normal behaviour or condition, researchers can infer its probable function.

Mice are currently the most closely related laboratory animal species to humans for which the knockout technique can easily be applied. They are widely used in knockout experiments, especially those genetic questions which relate to human physiology.

Examples of research in which knockout mice have been useful include studying and modeling different kinds of cancer, obesity, heart disease, diabetes, arthritis, substance abuse, anxiety, aging and Parkinson's disease. Knockout mice also offer a biological and scientific context in which drugs and other therapies can be developed and tested.

Gene knockout in rats is much harder and has only been possible since 2003.

The first knockout mouse was created by Mario R. Capecchi, Martin Evans and Oliver Smithies in 1989, for which they were awarded the Nobel Prize in Physiology or Medicine for 2007.

A detailed explanation of how knockout (KO) mice are produced is at the website of the Nobel Prize in Physiology or Medicine 2007.

Aspects of the technology for generating knockout mice, and the mice themselves have been patented in many countries by private companies.

All content from Kiddle encyclopedia articles (including the article images and facts) can be freely used under Attribution-ShareAlike license, unless stated otherwise. Cite this article:
Knockout mouse Facts for Kids. Kiddle Encyclopedia.