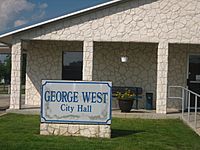 George West is a city in Live Oak County, Texas, United States, and named for cattle rancher George Washington West. The population was 2,524 at the 2000 census. It is the county seat of Live Oak County. George West was named the "storytelling capital of Texas" in 2005 by the Texas Senate; and it hosts the George West Storyfest, a festival that features storytelling, cowboy poetry, and music. Numerous ranches surround George West.

The Texas author and folklorist J. Frank Dobie was born in Live Oak County near George West in 1888. Former State Senator Cyndi Taylor Krier, also the administrative judge of Bexar County, was reared near George West in the unincorporated community of Dinero. 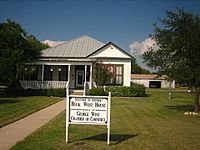 George West was a land venture and ranching enterprise of George Washington West and Kittie West. Originally from San Antonio, West began to build his town in 1913, after ranching from 1880 to 1912 in the area between Pleasanton and Corpus Christi. He sold his cattle holdings and began to colonize some 75,000 acres (300 km2).

West offered the San Antonio, Uvalde and Gulf Railroad $100,000 and a free easement through his land to build to George West. West had made his fortune on cattle drives but knew that the future rested with the transport of the animals on a train. He purchased some 120,000 acres in Live Oak County and held 26,000 cattle. A drought had caused such losses that he sold half of his acreage. Other ranchers tried to sell property at that time, and prices dropped to low levels.

In 1918, West offered $75,000 to build a new courthouse if the county seat was moved from Oakville, which was not on a railroad route, and if voters approved the plan. The courthouse actually cost $120,000 and was built to West's specifications. He also built schools, roads, and water and electricity plants.

George West was incorporated in 1946, and the government changed to home rule in 1980. 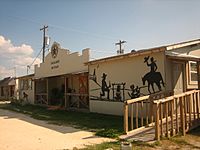 "Trailside Artisan", a business catering to Western goods and services, in George West

According to the United States Census Bureau, the city has a total area of 12 square miles (31 km2), all of it land.

There were 892 households out of which 40.1% had children under the age of 18 living with them, 57.8% were married couples living together, 14.1% had a female householder with no husband present, and 24.7% were non-families. 22.0% of all households were made up of individuals and 13.0% had someone living alone who was 65 years of age or older. The average household size was 2.80 and the average family size was 3.29.

All content from Kiddle encyclopedia articles (including the article images and facts) can be freely used under Attribution-ShareAlike license, unless stated otherwise. Cite this article:
George West, Texas Facts for Kids. Kiddle Encyclopedia.