Prairie smoke has pinnately divided leaves with 7–17 primary leaflets; there are also a few smaller secondary leaflets inserted between some of the primary leaflets. They are arranged in a rosette at ground level and are semi-evergreen: some basal leaves remain over the winter and often turn reddish purple.

The flowers bloom in spring. They appear on short reddish purple-tinged stems 15 to 41 cm (6 to 16 in) high and are arranged in umbels of 3 to 5 flowers. At the base of the umbel are leaflike green to reddish purple bracts. Sometimes there are also pairs of leaflike bracts on the stem below the umbel or on the stems of individual flowers. While blooming, the flowers nod downwards and remain mostly closed and bud-like, except for a tiny opening at the bottom. The five petals are cream to yellowish, suffused with pink or purple, but are mostly covered by the five red sepals. Between the sepals are five narrow bractlets. Hidden within the flower are a central cluster of pistils and a ring of many stamens around them.

Pollinated flowers turn upwards and open up. The pistils in the middle of the flower develop into heads of seeds with long fuzzy hairs that point upwards. The hairs resemble mauve smoke, hence the name prairie smoke.

The leaves and flowers grow from a caudex. The plant spreads by short underground rhizomes.

In the United States, Geum triflorum occurs in the west, midwest, and the state of New York. In Canada it is reported as growing in every province west of Ontario as well as the Yukon and Northwest Territories.

The species prefers to grow in dry, well-drained soils in full sun in most of its native range. It prefers cool summer climates, but it is intolerant of wet soils during the winter. 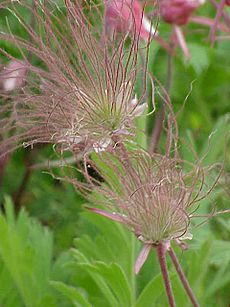 The flowers produce both nectar and pollen. They are visited mainly by bumblebees, which are able to force their way into the mostly closed flowers and reach the nectar. They also buzz-pollinate to dislodge pollen from the stamens and gather it to feed their young. Smaller bees such as sweat bees from the genus Lasioglossum feed on pollen grains from the opening of the flower. Bumblebees are the only effective cross-pollinators. Various insects chew holes in the top of the flower, near the stem, to reach the nectar.

Some Native Americans once made a tea from the plant's roots. Some Plateau Indian tribes used three-flowered avens to treat tuberculosis.

All content from Kiddle encyclopedia articles (including the article images and facts) can be freely used under Attribution-ShareAlike license, unless stated otherwise. Cite this article:
Geum triflorum Facts for Kids. Kiddle Encyclopedia.