Kids Encyclopedia Facts
This page is about the island in Maryland. For other uses, see Gibson Island. 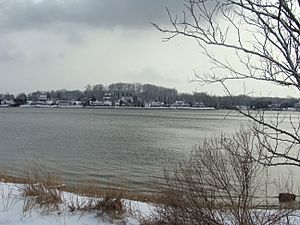 Gibson Island in late winter as seen from the mainland. The gated causeway is out of frame to the left

Gibson Island is an island situated off the western shore of the Chesapeake Bay. It is part of Anne Arundel County and is the eastern terminus of Maryland Route 177. It is connected by a causeway to Pasadena, of which it is sometimes considered a part. The two locations do not share a ZIP code.

Gibson Island’s history includes its use as a summer residence by Native Americans in the 17th century. Captain John Smith sailed past it in his voyage up the Chesapeake Bay in 1608. By 1663, the first land had been granted. There were many owners between these original grants and the purchase and consolidation of the island in the 1920s. W. Stuart Symington,Jr. (1871-1926) the founder of Gibson Island as it is known, bought the three existing island farms with his brother Thomas. They envisioned and developed it as a residential community where families from the Baltimore/Washington area could spend summers. One of the early owners was a man named Gibson, after whom the island is named.

The Symington brothers set certain areas aside for community facilities and divided the remaining land into building lots offered for sale through the Gibson Island Company, now known as Gibson Island Corporation. From that time to the present, Gibson Island has had its own real estate department specifically handling the listing and selling of island properties. Revenue generated from these sales is returned to the community for its upkeep and beautification.

The Symingtons, upon the advice of Edward H. Bouton, the developer of Roland Park and Guilford neighborhoods in Baltimore, hired Frederick Law Olmsted, Jr. to create a master plan for the island. One of the premier landscape architects of his time, he designed many landmarks across the country, including the National Mall, Rock Creek Park and the Jefferson Memorial. In 1925, the first deed and agreement was adopted and recorded. This provides Gibson Island Corporation with architectural oversight, helping to maintain the beauty and tranquility of the island over the years.

The Great Depression halted rapid development of the island. In 1936, a group of men deeply interested in the future of the island reorganized its ownership, passing control to its homeowners, thus allowing those with the greatest interest to preserve the island’s ambiance. Succeeding generations have carefully maintained the island's natural environment, with about two-thirds of its land set aside for recreation, forestry and open space.

Today, home prices on the island start at $US 1 million-plus, with the median home price being $2,765,385. This makes Gibson Island the most expensive zip code in the country. Gibson island is a gated community, limiting access to the island and its facilities to residents or those with a formal reason for visiting. Many residents of the island are seasonal residents who reside primarily in DC or Baltimore.

All content from Kiddle encyclopedia articles (including the article images and facts) can be freely used under Attribution-ShareAlike license, unless stated otherwise. Cite this article:
Gibson Island (Maryland) Facts for Kids. Kiddle Encyclopedia.