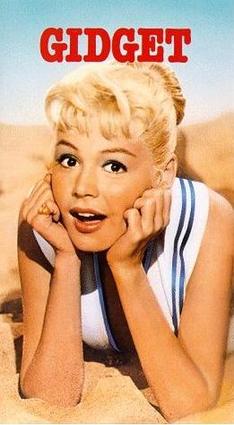 Gidget is a 1959 American romantic teen drama movie set in California. It is about a teenage girl who goes surfing. She has a romance with a young surfer. The movie stars Sandra Dee, Cliff Robertson, and pop singer James Darren. The movie was based on a novel by Frederick Kohner titled Gidget, the Little Girl with Big Ideas. The movie was directed by Paul Wendkos. Gidget was the first "beach party" movie. It was followed by two sequel movies, various television series, several made-for-TV movies, and the parody Psycho Beach Party. The movie received one award nomination. Gidget was the single main influence that brought surfing and the surfing subculture into the American mainstream.

All content from Kiddle encyclopedia articles (including the article images and facts) can be freely used under Attribution-ShareAlike license, unless stated otherwise. Cite this article:
Gidget Facts for Kids. Kiddle Encyclopedia.