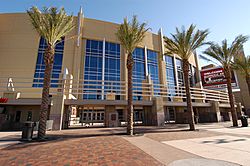 The Gila River Arena is a sports arena in Glendale, Arizona. The arena opened on December 26, 2003, and is the current home to the Arizona Coyotes of the National Hockey League (NHL). The arena was originally known as Glendale Arena until online company Jobing.com acquired naming rights in late 2006 for 10 years, which cost a reported $30 million. The building became Jobing.com Arena on January 1, 2007. In 2014, the team ended the contract with Jobing.com and reached a new deal with the Gila River Casinos, owned by a local tribe of Native Americans. The new arena name became official on September 10, 2014.

All content from Kiddle encyclopedia articles (including the article images and facts) can be freely used under Attribution-ShareAlike license, unless stated otherwise. Cite this article:
Gila River Arena Facts for Kids. Kiddle Encyclopedia.