Gingidiobora subobscurata is a species of moth in the family Crambidae. It is endemic to New Zealand. This species has been classified as "At Risk, Declining" by the Department of Conservation.

This species was first described by Francis Walker in 1862 and named Scotosia subobscurata. Walker stated he examined a specimen collected in Auckland by T. R. Oxley. This holotype specimen is held at the Natural History Museum, London. In 1875, thinking they were describing a new species, Alois Friedrich Rogenhofer, Baron Cajetan von Felder and Rudolf Felder named the moth Cidaria ascotata and illustrated it. This name was synonymised by Louis Beethoven Prout in 1927 when he placed the species within the genus Xanthorhoe. Edward Meyrick also described this species in 1883 thinking it was new to science. He named it Larentia petropola. Meyrick subsequently realised that the moth he described was the same species as that described by Walker. In 1884 Meyrick went on to synonymise his name with Scotosia subobscurata but placed the species within the genus Larentia. George Vernon Hudson discussed the species as Xanthorhoe subobscurata in 1898 and mentioned that both Scotosia subobscurata and Larentia petropola were synonyms. Again using the name Xanthorhoe subobscurata Hudson also described and illustrated the species in 1928. In 1987 Robin C. Craw placed this species within the genus Gingidiobora thus its current name is Gingidiobora subobscurata.

Larvae of this species are green and smooth.

Meyrick mentioned that the adults have a bluish tinge. Hudson described the adult moth as follows: 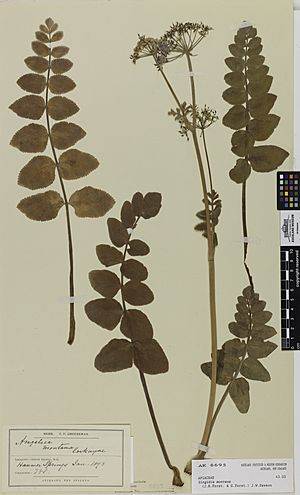 G. subobscurata is endemic to New Zealand. This species has occurred in Nelson, Otira Gorge at Arthur's Pass, Queenstown, and at Bold Peak at Lake Wakatipu.

Adult moths are on the wing from January to March. They are rare but tend to frequent bare rocky areas approximately 600m or more above sea-level.

This species inhabits the higher-rainfall upland and montane sites of the South Island. Larvae feed on Gingidia montana, also known as mountain aniseed. This is a plant that has been declining as a result of its attractiveness to browsing animals.

G. subobscurata has been given the "At Risk, Declining" conservation status under the New Zealand Threat Classification System.

All content from Kiddle encyclopedia articles (including the article images and facts) can be freely used under Attribution-ShareAlike license, unless stated otherwise. Cite this article:
Gingidiobora subobscurata Facts for Kids. Kiddle Encyclopedia.