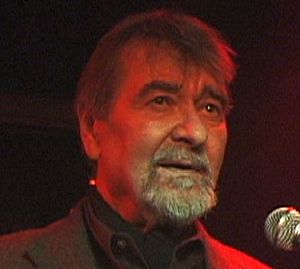 Giorgio Gomelsky (28 February 1934 – 13 January 2016) was a Georgian-British record producer, band manager, filmmaker and impresario. He owned the Crawdaddy Club in Richmond, London. He managed the rock bands The Rolling Stones and The Yardbirds. He also worked closely with Daevid Allen. In 1967, he started Marmalade Records (distributed by Polydor). He wrote songs under the name "Oscar Rasputin".

Gomelsky was born in Tiflis (now Tbilisi). His father was a doctor and his mother was from Monte Carlo. He grew up in many countries including Syria, Egypt, Italy and Switzerland. He moved to London, United Kingdom when he was a young adult in the 1950s. In the 1970s, he moved to New York City, United States.

All content from Kiddle encyclopedia articles (including the article images and facts) can be freely used under Attribution-ShareAlike license, unless stated otherwise. Cite this article:
Giorgio Gomelsky Facts for Kids. Kiddle Encyclopedia.