Glass Creek is a waterway flowing through the inner-eastern suburbs of Melbourne. It is a minor tributary of the Yarra River and now largely runs through a series of underground drains.

The creek was named after Hugh Glass, a land speculator in the early history of Melbourne, in 1844. It was originally referred to as Glass' Creek but the spelling gradually fell out of use in favour of the present-day Glass Creek.

Glass Creek is known to have little other than plant-life as it is polluted. Within that, though there are some fish and crayfish including the western mosquitofish and the Cherax (freshwater yabby).

The creek passes through two eastern suburbs of Melbourne in the City of Boroondara:

Much of the former creek route is now open parkland:

In the early history of Melbourne and during the indigenous settlement of the area, Glass Creek ran at-surface through what was then bushland. William Oswin is the first recorded owner of the land where Hays Paddock and Glass Creek flows into the Yarra on a property known as Kilby Farm. The first proposal to route the creek underground in its northern section was put forward by the City of Kew town clerk, W.D.Birrell, in 1943, but the project was not pursued. The exact date of the rest of the creek's re-routing through the underground drainage system is unknown, but a Melbourne and Metropolitan Board of Works map from the 1960s shows the creek entering the present-day drain near the southern entrance of Hays Paddock. 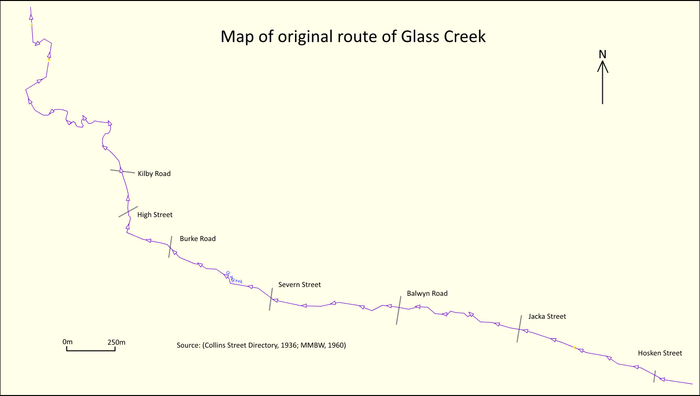 The original route of Glass Creek through North Balwyn and East Kew before it was placed underground some time in the 1960s.

The original route of the creek originated near Loma Linda Grove in Greythorn, the eastern part of Balwyn North. It flowed through present-day Jacka Street and Gordon Barnard Reserves, crossed Balwyn Road, through Hislop and Macleay/Myrtle Park, through the residential areas roughly following Maylands Avenue, through Stradbroke Park near present-day Kew High School, under High Street and along the present-day Glass Creek Trail before joining up to the current course near the southern entrance to Hays Paddock. Thence it flowed north-west into the Yarra River.

All content from Kiddle encyclopedia articles (including the article images and facts) can be freely used under Attribution-ShareAlike license, unless stated otherwise. Cite this article:
Glass Creek Facts for Kids. Kiddle Encyclopedia.