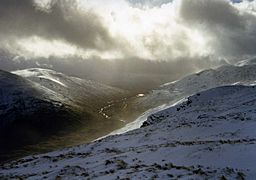 South-West Glen Lochay near to Stob an Fhir-Bhogha, taken from Southern slopes of Beinn Heasgarnich. This photograph was taken from looking South-southwest

Glen Lochay (Scottish Gaelic: Gleann Lòchaidh) is in Perthshire, Scotland through which the River Lochay runs eastward towards Loch Tay, joining the River Dochart at Killin. Glen Lochay is about 20 miles (32 km) long, running from a point north of Crianlarich to Loch Tay.

A road runs up the glen as far as Kenknock Farm (at ), but there is no vehicular access beyond this point. A track leads further up the glen past cottages at Badour, then Batavaime farm (at ), the last occupied building in Glen Lochay. The ruins of cottages can be seen higher up the glen, but these were vacated long ago.

The route of a seven-mile (11 km) walk through this "delightful and remote glen" is documented.

There is an extensive local hydroelectric network throughout this area, much of which is buried under the ground and goes largely unseen, but some pipelines are visible crossing the glen.

All content from Kiddle encyclopedia articles (including the article images and facts) can be freely used under Attribution-ShareAlike license, unless stated otherwise. Cite this article:
Glen Lochay Facts for Kids. Kiddle Encyclopedia.