Glenmont is a hamlet in the town of Bethlehem, Albany County, New York. Glenmont is in the northeastern corner of the town and is a suburb of the neighboring city of Albany. It was once accessible from the Hudson River by way of several docks but the river's channels have since been filled in. 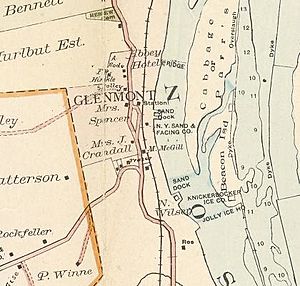 Glenmont dates back to the founding of the first hotel in Bethlehem, The Abbey Hotel, built in the early 18th century. The Abbey was built by Hugh Jolley who came to the Capital District from Galway in 1772. East of the hotel along the Hudson's shores was a racing track. The hotel was situated halfway between Albany and Van Wie('s) Point. Both Van Wie and The Abbey were important stops along the Hudson River for passengers traveling by boat (and later steamboat) from New York City to Albany. In 1804 the Albany and Bethlehem Turnpike's lower leg traveled from Kenwood south to The Abbey. The hotel was demolished in the 1960s.

All content from Kiddle encyclopedia articles (including the article images and facts) can be freely used under Attribution-ShareAlike license, unless stated otherwise. Cite this article:
Glenmont, New York Facts for Kids. Kiddle Encyclopedia.