Arizona elegans is a species of medium-sized colubrid snake commonly referred to as the glossy snake or the faded snake, which is endemic to the southwestern United States and Mexico. It has several subspecies. Some have recommended that A. elegans occidentalis be granted full species status.

Subspecies of Arizona elegans include:

The glossy snake and its many subspecies are all similar in appearance to gopher snakes. However, they are smaller than gopher snakes, with narrow, pointed heads, and a variety of skin patterns and colors. They appear "washed-out" or pale, hence the common name, "faded snakes".

They are shades of tan, brown, and gray with spotted patterns on their smooth, glossy skin, and a white or cream-colored unmarked ventral surface. Coloration often varies in relation to the color of the soil in a snake's native habitat. 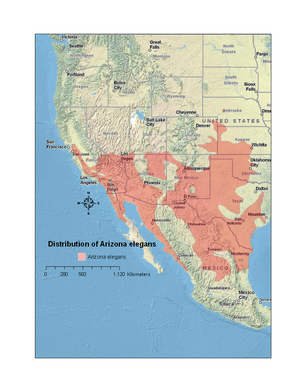 Habitat is normally semi-arid grasslands of the southwestern United States, from California in the west to Kansas in the east and as far south as Texas, and northern Mexico.

They are nonvenomous, nocturnal predators of small lizards. They are also sometimes found in attics.

Glossy snakes are oviparous. Adults breed in the late spring and early summer. Clutches average from 10 to 20 eggs. The eggs hatch in early summers and the newly hatched young are approximately 25 cm (9.8 in) in total length.

All content from Kiddle encyclopedia articles (including the article images and facts) can be freely used under Attribution-ShareAlike license, unless stated otherwise. Cite this article:
Glossy snake Facts for Kids. Kiddle Encyclopedia.