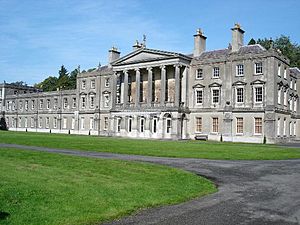 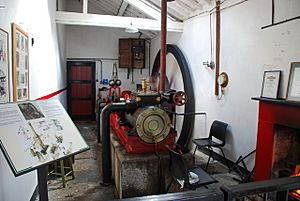 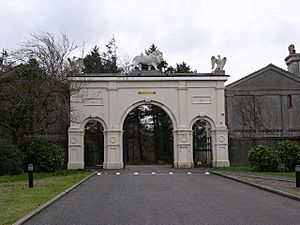 Gateway at the main entrance

Glynllifon is the name of the old estate which belonged to the Lords Newborough, near the village of Llandwrog on the main A499 road between Pwllheli and Caernarfon in Gwynedd, Wales The original mansion is now a privately owned Country House hotel and wedding venue.

The greater part of the original park, Parc Glynllifon, now includes Coleg Meirion-Dwyfor's agricultural college, craft workshops and many educational facilities. There is also a cafe and maze at the entrance and exhibits such as an 1854 De Winton horizontal stationary steam engine and Cornish boiler, which were restored by Fred Dibnah can be seen. Many fairs are held in Glynllifon Park carpark, especially steam and craft fairs.

The park, which is open to the public includes gardens which are of historical and scientific importance; they have been designated Historical Garden (Grade I) status as well as a site of Special Scientific Interest by Cadw, and the Countryside Council for Wales.

Glynllifon is also a designated Special Area of Conservation under Annex II, by the Joint Nature Conservation Committee. It is home to the Lesser horseshoe bat, Rhinolophus hipposideros. This 189.27 hectare site is both a maternity and hibernation site for about 6% of the UK population.

The present mansion house, Plas Glynllifon, was built in 1836–48 to the designs of Edward Haycock, a Shrewsbury architect and succeeded at least three previous houses on the site. The original building predated a rebuilding c.1600 which itself was rebuilt in 1751. That house, a 'moderate-sized brick mansion' was destroyed by a major fire in 1836. The rebuilding that followed and an extension in 1889-90 is largely the house that exists today.

The house is a neoclassical 3-storey building with an attached lower service courtyard to west and a symmetrical 13-bay south facing facade dominated by a central hexastyle pedimented portico. It is built of stone with rendered elevations under a slate roof with rendered chimney stacks topped by moulded cornices and an Italianate water tank.

Glynllifon was the seat of the Glynn family until 1700, when it passed to the Wynn family of Bodvean. Sir Thomas John Wynn became the 1st Baron Newborough in 1776 and Glynllifon passed down in the family to Frederick George Wynn, the 3rd Lord Newborough's youngest son.

The house is now a privately owned five-star Country House hotel and wedding venue which has undergone substantial renovation. In January 2020 it was announced that the business was in the hands of receivers.

It is a Grade I listed building.

All content from Kiddle encyclopedia articles (including the article images and facts) can be freely used under Attribution-ShareAlike license, unless stated otherwise. Cite this article:
Glynllifon Facts for Kids. Kiddle Encyclopedia.