Kids Encyclopedia Facts
For other places with the same name, see Goat Island. 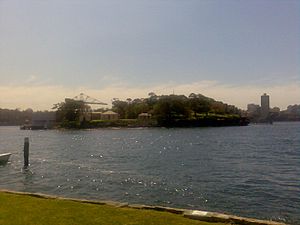 Goat Island is a heritage-listed island located in Port Jackson, in Sydney, New South Wales, Australia. Located north-west of the Sydney central business district, Goat Island is about 300 metres (980 ft) wide in a north/south direction and 180 metres (590 ft) long in an east/west direction; and covers an area of 5.4 hectares (13 acres). Goat Island lies off the shores of the Sydney suburbs of Balmain and Millers Point, at the junction of Darling Harbour with the main channel of Sydney Harbour.

The island is a former gunpowder storage, arsenal, bacteriology station, shipyard, powder magazine, maintenance facility and accommodation and now interpretation centre and education facility. Over the years Goat Island has served as a quarry, convict stockade, explosives store, police station, fire station, boatyard and film set. Today the island forms part of the Sydney Harbour National Park. The built facilities on the island were designed by Edmund Blacket and Alexander Dawson and built from 1826 to 1994. Goat Island is also known as Memel or Me-Mel, meaning the eye. The property is owned by the NSW Office of Environment and Heritage, an agency of the Government of New South Wales. It was added to the New South Wales State Heritage Register on 2 April 1999.

Known as 'Memel' by the indigenous people of Port Jackson, Captain David Collins indicates that Bennelong had told him that the island 'was his own property, that it was his father's and that he should give it to By-gone, his particular friend and companion' Bennelong appeared to be 'much attached' to Memel and was often seen there with his wife Barangaroo. How this property transferred from one person to another in the traditional culture was not recorded and why Bennelong should give it to By-gone, was not recorded.

Whilst the use of Goat Island as both a naval arsenal and a convict stockade were discussed during the late 1820s, the first use of the island was in 1831, as a sandstone quarry. This use set the tone for much of the later life of the island, with the first of many bureaucratic disputes between the colony's local civil government and the local military establishment who reported directly to the War Office in London. In this case the Surveyor General, Major Thomas Mitchell, objected to the quarrying on the grounds that what was being quarried away was a valuable point for the purpose of defence, and quarrying soon ceased.

By the early 1830s there was considerable concern about the amount of military explosives being stored in the Commissariat in The Rocks district of central Sydney. In 1833 gangs of convicts started work quarrying stone and levelling ground on a site at the south-western side of the island. The powder magazine was completed by January 1839, and is a substantial, stone-built, bomb-proof construction. It was during this original period of construction that the convict Charles Anderson was said to have been kept chained to a rock for two years. A stone cut couch, with fixing points for a platform and the wooden lid said to have provided him with shelter, can still be seen.

Also in the late 1830s, a water police station was built on Goat Island. This was constructed at the north-eastern tip of the island and at the opposite end from the magazine. For defensive reasons, and to provide a clear boundary between the domain of the police, part of the colonial civil government, and that of the military magazine, a water level ditch was cut to separate the north-eastern tip of the island from the bulk of the island. This 'cut' can still be seen today.

In 1854 a new Colonial Magazine was constructed to the north of the existing magazine, which became known as the Queen's Magazine. This was a building of much lighter construction, and was intended for the storage of civilian explosives belonging to the colonial government and local merchants. In 1864 the police station was converted into a laboratory for the preparation of cartridges, requiring the building of a bridge over the cut. The water police were moved to Kirribilli. In the 1870s magazines were built on the east side of the island to house the new explosive dynamite. By this time most of the storage of propellant powders and cartridge manufacturing had moved to nearby Spectacle Island.

In 1900 all explosives were removed from Goat Island. The island is believed to have been used for a period in that year as a bacteriology station, for the investigation of the major outbreak of bubonic plague in the nearby Rocks district, but firm evidence for this usage is lacking. What is certain is that by 1901 the island had become the depot for the Sydney Harbour Trust, responsible for the maintenance of that body's significant fleet of tugs, dredgers and other floating plant. Over the following years until the mid-1920s, the island saw the construction of a harbour master's house on the highest point of the island, together with four cottages for married members of the fireboat crew stationed on the island, and a barracks for the unmarried members of the same crew.

Between 1925 and 1931 the magazine area to the south-west of the island was converted into a shipyard for the repair of the trusts vessels and floating plant. Over the following years this has grown to include four slipways, of 500 ton, 150 ton and 12 ton (x2) capacity respectively, plus a 770-foot wharf. The Colonial Magazine was recycled as a shipwright's workshop, whilst the Queens Magazine became a general store. In 1936 the Sydney Harbour Trust was replaced by the New South Wales Maritime Services Board, but the island retained its role.

The Maritime Services Board finally relinquished control of the island in 1995, and Goat Island became a unit of the Sydney Harbour National Park.

During the mid-1990s to the early 2000s, the island was used as a film-set for the Australian television series Water Rats.

The island has also played host to rock concerts from Midnight Oil in 1985 and Green Day in 2000. Both were presented by radio station Triple J.

Panic at Rock Island, an Australian telemovie, was filmed on the island in 2010.

On 14 October 2016, it was announced by NSW Premier Mike Baird "that Goat Island (is) "to be returned to Aboriginal people of NSW" and that "Goat Island has enormous cultural heritage significance for Aboriginal people... We are committed to ensuring Aboriginal leadership in management and decision-making for the sustainable use of Goat Island.

All content from Kiddle encyclopedia articles (including the article images and facts) can be freely used under Attribution-ShareAlike license, unless stated otherwise. Cite this article:
Goat Island (Port Jackson) Facts for Kids. Kiddle Encyclopedia.