In 1824, in appreciation of the enormous service rendered to this country by the Marquis de Lafayette during the Revolutionary War, Congress voted to grant him a full township in the Florida Territory. This tract was called the Lafayette Land Grant and encompassed over 23,000 acres. While the Marquis never came to visit his property, he designated an agent to sell parcels of it on his behalf. The 2,400 acres upon which Goodwood Plantation was sited was purchased by Hardy Croom from the Lafayette Grant in 1834.

Goodwood Plantation (also known as Old Croom Mansion) was a medium-sized cotton plantation of about 1,675 acres (7 km2) in central Leon County, Florida, established by Hardy Bryan Croom. It is located at 1600 Miccosukee Road. The plantation was added to the U.S. National Register of Historic Places on June 30, 1972.

The plantation home is now a historic house museum known as Goodwood Museum & Gardens that features original family furniture, porcelain, textiles, glassware, art and personal effects. The rooms have been decorated to appear in the years surrounding World War I. The house is visited by guided tour, for which there is a fee.

The grounds cover 19 acres (77,000 m2), and the gardens also feature an early 20th-century design. Admission to the gardens is free.

The Leon County Florida 1860 Agricultural Census shows that Goodwood Plantation had the following:

( It is not known why the number of enslaved people was not listed in 1860, but in 1857, Arvah Hopkins bought 40 slaves, together with his purchase of the real estate. He later purchased more enslaved people. )

The Croom family of Lenoir County, North Carolina, wealthy tobacco planters, began purchasing land in North Florida in the 1820s, including plantations in Mariana, Quincy and Tallahassee. Hardy Bryan Croom, a planter and amateur naturalist, brought attention to the now rare stinking cedar. He began amassing the land for the estate which come to be known as Goodwood, purchasing about 640 acres (2.6 km2) of the Lafayette Land Grant in 1833. His younger brother, Bryan Croom, made similar purchases. The men brought a number of enslaved people with them from North Carolina, and throughout the Croom years, purchased many more slaves to operate their cotton and corn plantations.

On Saturday, October 7, 1837, Hardy B. Croom and his wife, three children—two daughters and a son—accompanied by a maternal aunt, boarded the steam packet liner S.S. Home in New York City bound for Charleston. The Home sank off the coast of North Carolina during the 1837 Racer's Storm, a Hurricane. The entire family perished in the wreck. No will was found, so his brother, Bryan Croom, assumed he had inherited his brother's Florida plantation property.

A small home was framed in on the site at Hardy's death, and Bryan's enslaved workers completed it. But Bryan Croom ordered construction of a long planned main house thereafter. Construction of the approximately 10,000 square foot mansion was finalized 1850 or earlier. The house, which design may have been that chosen by the doomed Hardy, was built mainly by enslaved laborers also. Richard Shine, a prominent Tallahassee builder at the time, oversaw the construction. When completed, the house was Italianate in style, a dark rose color with ornate burgundy colored railings. While the reason the house was named Goodwood is unclear, it became known by that name in the 1840s. By 1845, Bryan claimed ownership of some 2,500 acres (10 km²) of land in Leon County alone, making him one of the wealthiest men in the area.

After the Home tragedy, relatives of Hardy's wife Frances, primarily her mother, Henrietta Smith, fought what became a landmark court case. The court case dragged on for some 20 years. Who would inherit when an entire family perished in a common disaster without a will ? Mrs.Smith did not initially sue, but first asked her son -in -law's brother, Bryan Croom, for a part of the estate, in light of the loss of her daughter, grandchildren and her sister. Bryan, however, declined to cede Mrs. Smith anything. Bryan Croom won in lower court proceedings. But the Florida Supreme Court ultimately awarded the Smith Family much of the estate in 1857. The issues were two: was Hardy domiciled in North Carolina at the time of his death, or was he domiciled in Florida, where his large plantation interests were? The laws of the two states were different. The second issue was: who died last in the wreck of the steamship Home—someone in the maternal line or Hardy himself? The Florida Supreme Court decided Hardy was still domiciled In North Carolina at the time of his death. The Court also decided he had not intended to establish domicile in Florida when he boarded the Home, but had instead, based on his last letters, determined to relocate his family to Charleston, South Carolina, where he had rented a house. But Hardy and his family drowned before reaching another state. Testimony from witnesses who survived the Home tragedy testified that Hardy's son ( hence representative of the maternal line ) was the last surviving member of the family. Witnesses saw his son clinging to a spar in the ocean, after all the other Crooms had perished.

Mrs. Smith did not come to Goodwood to live, but in 1858, sold the estate to Arvah Hopkins. Hopkins, a New Yorker, was a prominent local merchant who had married the educated and well-to-do Susan Branch, the youngest daughter of former North Carolina Governor John Branch. The couple had nine children, of whom eight survived to adulthood. The Hopkins were also large scale slave holders who continued formal plantation operations until 1865. The Hopkins farming operations continued after the war, with share cropping and tenant farming done mostly by formerly enslaved people.

In 1885 an Englishman, Dr. William L. Arrowsmith, claiming to have been surgeon-general to the Italian Giuseppe Garibaldi, as well as holding other offices in Europe, purchased Goodwood and 160 acres (0.65 km2) surrounding it. He brought with him some of the paintings and furnishings still in the house. Arrowsmith died about eight months later, leaving his wife and her companion, Martha Dykes, to live on the estate for more than the next twenty years. Mrs. Arrowsmith is buried in Tallahassee, leaving what was left of her personal estate to Miss Dykes.

Before her death, Mrs. Arrowsmith sold Goodwood to an extremely wealthy widow, Mrs. Alexander (Frances) Tiers. The year was 1911. Fannie Tiers, whose principal estate, Farmlands, was in Morris County, New Jersey, was related by marriage to the Fleischmann family, owners of Waverly Plantation, which was adjacent to Goodwood. Although she spent only the winter months at Goodwood, Mrs. Tiers instituted an expansive renovation of the estate and remodeled the house to a Mt Vernon style and replaced the wrought iron with Georgian columns. She remodeled three other antebellum structures, the original kitchen, the original small house and a building whose original use remains uncertain. It may have been a storehouse or commissary, a place where bricks were made or other plantation industries occurred. These buildings still stand. Mrs. Tiers added a water tower, where previously wells, cisterns and pumps supplied the plantation. She built an amusement hall, guest cottages, servant quarters, a heated swimming pool, tennis courts and a carriage house. Mrs. Tiers entertained lavishly, and many of her wealthy friends came from the North to enjoy North Florida's warm winters.

Mrs.Tiers moved to Paris in 1925, selling Goodwood to Florida State Senator William C. Hodges. Senator Hodges married his wife Margaret Wilson when she was 18 and he was 41 years of age. The couple had no children. They did entertain lavishly at Goodwood, not only politicians but an eclectic group of visitors, including artists, writers and numerous public figures. They kept macaws, peacocks, parrots, and ornamental fowl. They also owned small monkeys, some known for escaping into the neighborhood.

Senator Hodges, a lifelong cigar smoker, died of a heart condition at Goodwood in 1940. Mrs. Hodges, at friend's urging ran for her husband's unexpired senate term. She initially announced she would do so, providing she could run unopposed. Others did oppose her however, and she lost. Mrs. Hodges rented the guest cottages for income after her husband died.

In 1948, Margaret Hodges remarried. Her second husband was Thomas Milton Hood, a West Virginia native and Army Air Corps Major she had met through the rental of one of her guest cottages. Margaret was more than 10 years her new husband's senior. The Tallahassee Democrat, in a March 3, 1948, article reported that the two had filed for a marriage license. The prospective groom was described as a " Washington DC designer and an engineer. "

After his wife's death in 1978, Major Hood rented out the guest cottages to a colorful group of people, creating an artist's colony atmosphere. He also began planning for the restoration of Goodwood as a house museum and public park. He established the Margaret E. Wilson Foundation in her memory. He died in 1990, after years of poor health. Tom Hood also left the Atkinson Children's Trust for Margaret's Great Nephews and Nieces. Christine Wilson Atkinson, Diane Margaret Atkinson, Thomas Patrick Atkinson, David Lane Atkinson and William Hodges Atkinson. The survival of Goodwood is due in large part to the Major's efforts, for he resisted calls to sell or donate Goodwood to the state, to sell it otherwise, or allow it to be torn down for development. After his death,the Margaret E. Wilson Foundation and its operating agent Goodwood Museum and Gardens, Inc. assumed stewardship for Goodwood. 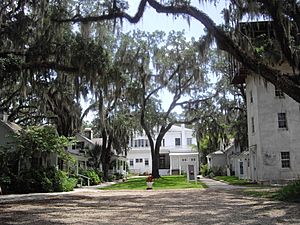 View from the barn. 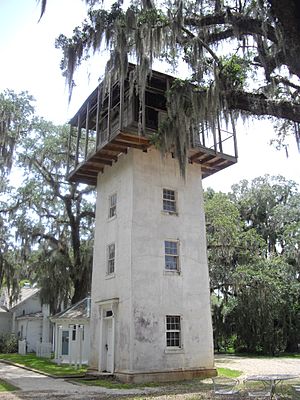 Tower under renovation, as it appeared in 2010.

All content from Kiddle encyclopedia articles (including the article images and facts) can be freely used under Attribution-ShareAlike license, unless stated otherwise. Cite this article:
Goodwood Plantation Facts for Kids. Kiddle Encyclopedia.