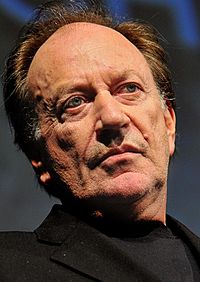 Paskaljević lived between Belgrade and Paris and he held both Serbian and French citizenship. As of 2008 he was named Officer of the French Ordre des Arts et des Lettres.

All content from Kiddle encyclopedia articles (including the article images and facts) can be freely used under Attribution-ShareAlike license, unless stated otherwise. Cite this article:
Goran Paskaljević Facts for Kids. Kiddle Encyclopedia.