Gorda is an unincorporated community in Monterey County, California. It is located 3 miles (4.8 km) north of Cape San Martin, at an elevation of 148 feet (45 m). It is one of the three small settlements of filling stations, restaurants, and motels located along State Route 1 on the Big Sur coast. The ZIP Code is 93920, but mail must be addressed to Big Sur, and the community is inside area code 805.

The fresh springs in Gorda were used by Native American tribes. The first settlement by Westerners was in 1878, when a stagecoach stop was built in Gorda. The settlement expanded with the Gold Rush of the 1880s. The town is now the location of the Gorda Springs Ocean Side Resort.

Gorda is derived from the Spanish word for "fat" or "well-fed".

As of April 26, 2008, Gorda had the highest gasoline prices in the United States at $6.70 per gallon. Part of this cost goes to subsidize the 100 gallon per day Diesel generator fuel bill for the town.

Under the Köppen climate classification, "dry-summer subtropical" climates are often referred to as "Mediterranean". This climate zone has an average temperature above 10 °C (50 °F) in their warmest months, and an average in the coldest between 18 to −3 °C (64 to 27 °F). Summers tend to be dry with less than one-third that of the wettest winter month, and with less than 30 mm (1 in) of precipitation in a summer month. 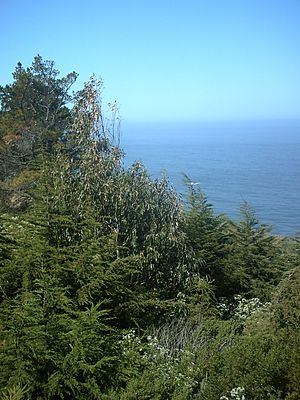 All content from Kiddle encyclopedia articles (including the article images and facts) can be freely used under Attribution-ShareAlike license, unless stated otherwise. Cite this article:
Gorda, California Facts for Kids. Kiddle Encyclopedia.