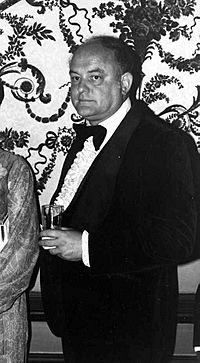 Alexander Gordon Jump (April 1, 1932 – September 22, 2003) was an American actor. He is known for playing Mr. Horton in a two-part special of Diff'rent Strokes. He is also known for playing the Maytag repairman. He was born in Dayton, Ohio.

All content from Kiddle encyclopedia articles (including the article images and facts) can be freely used under Attribution-ShareAlike license, unless stated otherwise. Cite this article:
Gordon Jump Facts for Kids. Kiddle Encyclopedia.