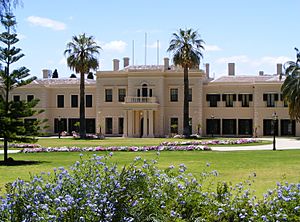 Government House from its southern fence

Government House, located in Adelaide on the corner of North Terrace and King William Road, is the official residence of the Governor of South Australia. 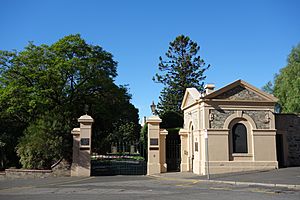 Gates to the main entrance to Government House on North Terrace, Adelaide 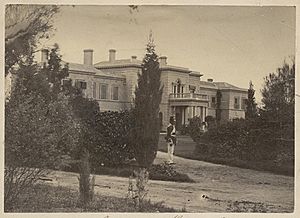 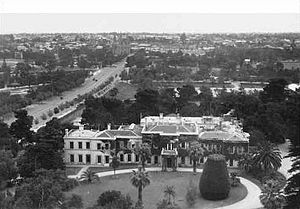 View of Government House and North Adelaide circa 1933

The original 'Government Hut' was a thatched hut constructed by the seamen of HMS Buffalo. Governor John Hindmarsh wrote in May 1837 "I have but one end of my mud hut finished an all my family lay on the floor of one room while two smaller ones serve for Mrs. H., myself and a female servant." When Lieutenant Colonel George Gawler replaced Hindmarsh in 1838, he abandoned plans for a permanent house of timber and gave directions for the erection of a new building of masonry to cost £4,000 - if possible, but not to exceed £5,000.

A plan had been obtained from an English architect, Edward O'Brien, but this was amended by George Strickland Kingston, who had come to South Australia as an assistant to the Surveyor General, William Light, and who had had some experience in architecture and building. When Kingston received tenders for the proposed work they were in the vicinity of £7,000. After further amendment of the plans to reduce the cost, a contract was let to the builders, Messrs East and Breeze. After Governor Gawler was recalled to England in 1841, partly because of his "extravagant" building programs, his successors George Grey and Lieutenant Colonel Frederick Holt Robe found it necessary to spend the least possible amount on the house.

The earliest part of the House to be built was the east wing of the present building. It was completed and occupied in May 1840. Government House is thus probably the second oldest continuously occupied house in the State, after Walkley cottage in St Mark's College, Pennington Terrace, North Adelaide, which was first occupied in mid-1839. When completed, Government House consisted of the present main Drawing Room, Morning Room, Small Dining Room, and upstairs there were three bedrooms, a dressing room and two small servants' rooms. Governors, their families and house guests make use of all the upstairs rooms.

It was listed on the South Australian Heritage Register on 24 July 1980 and on the defunct Register of the National Estate on 21 March 1978.

Governors formerly used a summer residence in the Adelaide Hills to escape the heat of the Adelaide Plains. Two buildings were used for this purpose. The first of these, Old Government House, was built in what is now the Belair National Park in 1860. In 1880, this building was superseded by a larger residence at Marble Hill near Norton Summit, until it was destroyed in the Black Sunday bushfires of 1955. Subsequently, the Governor was not provided with a summer residence.

Government House is located in well kept grounds which are periodically used for important public ceremonies, such as:

In 2019 a Government House Arts Residency program was instituted, with the inaugural recipient being Margaret Worth.

Cottages were built in the northern part of the grounds, originally for the butler (1928) and the chauffeur (1945). The grounds of Government House itself are surrounded by prominent public buildings, statues and memorials:

All content from Kiddle encyclopedia articles (including the article images and facts) can be freely used under Attribution-ShareAlike license, unless stated otherwise. Cite this article:
Government House, Adelaide Facts for Kids. Kiddle Encyclopedia.