Belair National Park (formerly known as the National Park and as Belair Recreation Park) is a protected area in Belair, South Australia, 13 kilometres (8.1 miles) south of Adelaide city centre; it covers an area of 835 hectares (2,060 acres). It was proclaimed in 1891 and was the first national park in South Australia, second in Australia (after Sydney's Royal National Park which was proclaimed in 1879) and the tenth in the world. The national park lies within the Adelaide Hills and Mitcham council area, and forms part of a chain of protected areas located along the Adelaide Hills Face Zone. The national park is administered by the Department of Environment, Water and Natural Resources.

Belair was originally inhabited by the Kaurna Aboriginal people. The area was called Pradli, which means “baldness”, because the appearance of the area when looking south from the Adelaide Plains was “bald like the moon.” The first Europeans to set foot in the area were crewmen from the Coromandel in 1837. The first European to settle in the area was a squatter, E. Nicholas Foott, who in 1839 dug a well and built a stone cottage, spending £500 despite not holding a title to the land. In 1840, South Australian governor George Gawler set the land aside for a government farm, forcing Foott to leave the land, though he was paid £300 for his improvements to the land (he later became a member of the Victorian Legislative Assembly).

Governor Grey arrived in May 1841, with a remit to cut Government expenditure and raise revenue, and announced in the Gazette of 15 July of the intended sale by auction of the land. This, however, did not take place, and in the depression of 1841–1842 a dozen or so unemployed men and their families were allowed to settle there temporarily. In June 1844, four sections at the western end (874, 875, 878 and 882) totalling about 400 acres (160 ha) were sold. In 1848 a cottage, long since demolished, was erected alongside the creek as a residence for the farm manager, and for occasional use by the Governor. In 1858 a residence, complete with swimming pool, was built as a "summer house" for the Governor, Sir Richard MacDonnell (served 1855–1862), and used by his successors Sir Anthony Musgrave (1873–1877), and presumably Sir William Jervois (1877–1883), at least until the more imposing edifice at Marble Hill was completed.

From 1874 to 1884 the Government Farm was managed by William Cook (1815–1897), father of Edith Agnes Cook. His eldest daughter Katherine wrote an article on that period of the farm's history for the South Australian Archives. His predecessor was Ebenezer Jarvis (c. 1829–1897), who left to take a post as manager of Government House, Adelaide. Two great bushfires occurred during their time; in 1866/1867 and 1877, when many old trees were destroyed. Proposals in 1881 to sell off parts of small portions of the land were opposed by Walter Gooch, James Page and the Australian Natives Association, which led in 1883 to an Act of Parliament prohibiting its sale. In 1888 further agitation by Gooch, Arthur Falconer Robin (1867–1906) and Samuel Dixon of the Royal Society of South Australia led to a parliamentary decision that the Government Farm be established as a public park, and after some delays the National Park Act received the Governor's assent in January 1892. Another person given partial credit was William Henry Selway of the Field Naturalists' Section of the Royal Society.

In 1985, the Belair National Park was declared as a state heritage area under the South Australian Heritage Act 1978-1980. In 1987, the nearby National Park railway station was closed. 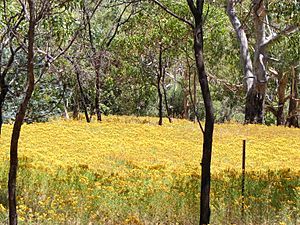 The first European people traversed the Belair area in 1837. In 1840, Governor Gawler raised a government farm on which sick horses and bullocks from government departments could be agisted. In 1881, a proposal was put forward for small agricultural holdings and also, the national park was dedicated, making it the first National Park in South Australia. Many exotic and non-indigenous plants were introduced and are now found in the park as weeds. Numerous native plants, such as Cootamundra wattle, have become environmental weeds after being introduced into areas outside their natural range.

The Belair National Park has suffered major disturbance to its natural ecosystems and natural vegetation communities through the accidental invasion of non-indigenous plants as well as the deliberate introduction of exotic and non-indigenous plants to certain zones within the park. In spite of these problems, several remnant stands of rare native plant species endemic to the Mt Lofty Ranges can be found there in season, mostly along tracks in less visited areas of the park's walking trail system. Both Donkey Orchids and Spider Orchids are among several diminutive flowers usually seen late winter each year.

Belair National Park is situated 13 km south east of Adelaide city centre in South Australia, in the suburb of Belair, and is one of the few remaining areas of relatively undisturbed native vegetation in the Adelaide Hills. 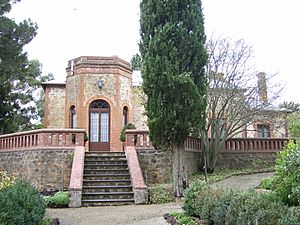 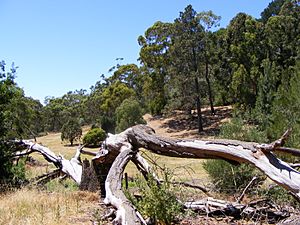 The end of the Waterfall Hike 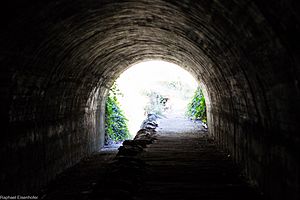 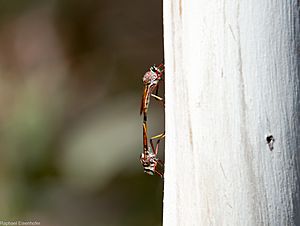 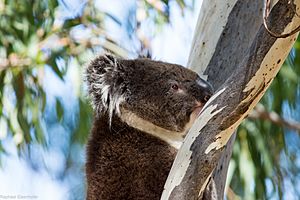 A short circuit around Playford Lake.

A 3 km circuit walk from the main car park to the Adventure Playground.

A 4 km circuit departing from near Playford Lake.

The national park 's best walk. A 6.5 km circuit that visits the park's waterfalls and travels to the higher areas away from the recreation areas.

The first 5 km of the Yurrebilla Trail is in the national park . It begins at the Belair railway station and continues toward the Lower Waterfall before departing the park at the Sheoak Road boundary.

All content from Kiddle encyclopedia articles (including the article images and facts) can be freely used under Attribution-ShareAlike license, unless stated otherwise. Cite this article:
Belair National Park Facts for Kids. Kiddle Encyclopedia.